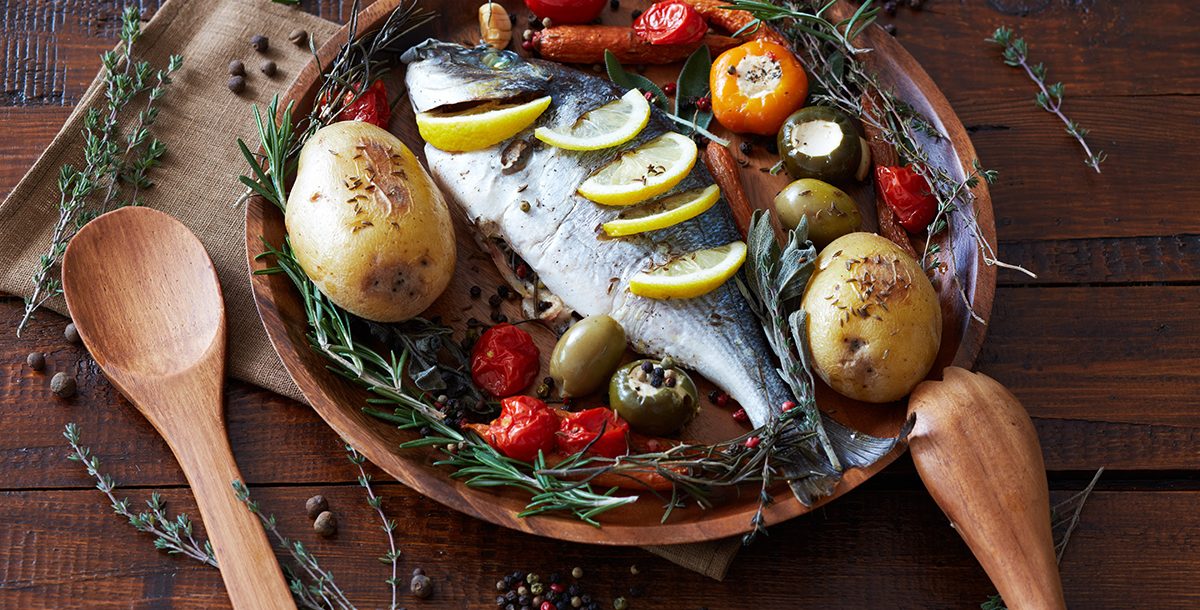 Can the Mediterranean Diet Help Reduce the Risk of Alzheimer’s?

You may not be what you eat, but what you eat does affect your health. For example, did you know that diet and exercise may play a role in your risk of developing Alzheimer’s disease?

Researchers have found some interesting connections between the Mediterranean diet and dementia, and Alzheimer’s is a form of dementia. The more you know about these findings, the better prepared you are to make better choices for your health.

First of all, what is the Mediterranean diet?

A typical diet from this region contains these foods:

The diet gained popularity after an American scientist completed the “Seven Countries Study.” This study looked at diets in Finland, Greece, Holland, Italy, Japan, United States and Yugoslavia.  Since then, researchers have connected a Mediterranean-style diet with increased HDL (“good” cholesterol), lower blood pressure, lower blood sugar levels and lower waist measurements. All of these can be markers of certain diseases later in life, including dementia.

What is the relationship between Alzheimer’s and diet/exercise?

Diet seems to play a role in those who develop dementia.

A recent study noted that people who eat certain foods had less shrinkage in their brains. These foods are high in unsaturated fats, fruits, vegetables and fish. They earned higher scores on cognitive tests. They also had fewer protein biomarkers typically seen in Alzheimer’s patients.

One theory is that the antioxidants found in certain foods cleanse the brain. They lower the buildup of protein that can lead to dementia. Others suggest the diet reduces inflammation in the brain. Another possibility is that low cholesterol levels lower the risk of memory problems. People with high amounts of cholesterol in their blood tend to have a greater risk.

So, how can the Mediterranean diet maybe help prevent Alzheimer’s?

Some researchers believe eating a Mediterranean diet can help reduce the risk of Alzheimer’s disease. They noticed that people who follow this type of diet tend to have lower levels of stroke, type 2 diabetes, cardiovascular disease and cholesterol. They also appear to have slower rates of decline in memory and thinking.

It’s important to note that one limitation of the original study is that it was observational. It’s possible that other habits are helping people avoid dementia. However, more recent studies show a relationship between cell damage caused by stress as well as inflammation and the risk of developing dementia. They point to the way diet can prevent changes to DNA structures called telomeres.

Also, the Mediterranean diet isn’t a perfect one. Some of the foods eaten in the region are high in calories and can lead to unhealthy weight gain. It’s also helpful for people to eat a variety of foods found in the diet rather than sticking with a few items they prefer to eat.

Learn more about the neurology services as well as nutrition services we offer at Mercy Health.