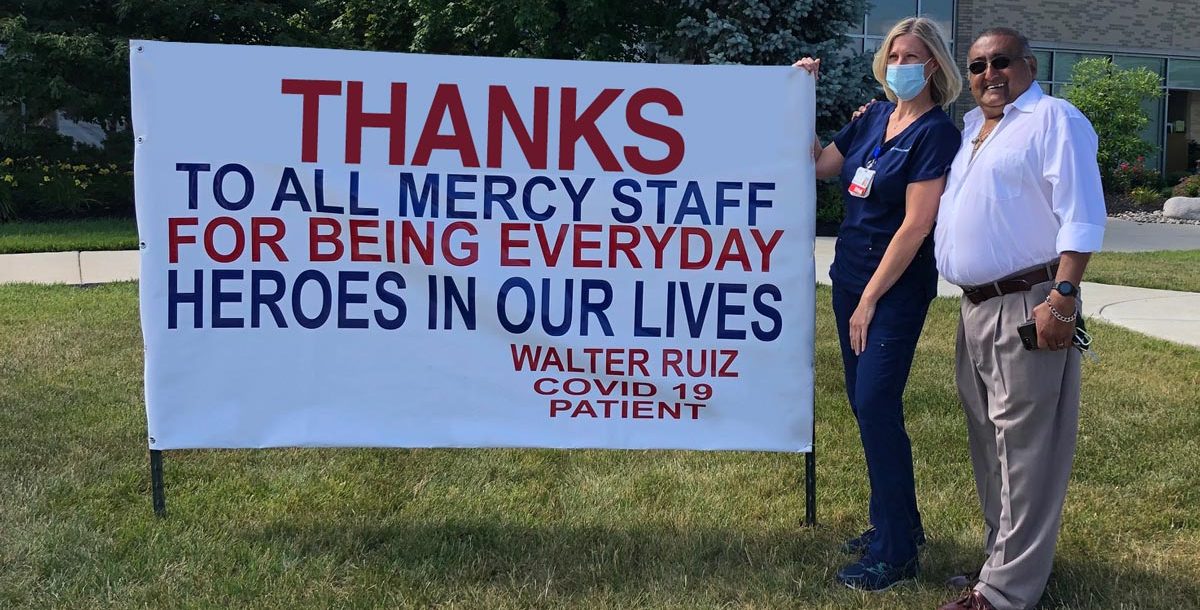 A Nurse’s Words Inspire a Patient with COVID-19

This past spring Walter Ruiz, 60, from Hamilton, Ohio, suspected something was wrong.

The screen printer remembers going to supermarket and feeling tired. He initially assumed it was related to his diabetes. However, the unwell feelings persisted. In late April when he was at work by himself, Walter fainted.

“I don’t know what time I went down or what time I came to,” he says. “I couldn’t get up and had to crawl to the wall for support to stand up. I thought my blood sugar was low, but when I got home and measured my sugar it was fine. I laid down and slept. I remember feeling feverish and sometimes cold. My back and leg hurt. I thought maybe I hit a paint can when I fainted.”

Four days after his symptoms began, Walter was still tired and got dizzy while brushing his teeth. He had his suspicions about what was happening. When he went to enjoy his customary evening glass of milk and found it had no taste, he knew.

Walter bathed, shaved and went to Mercy Health – Fairfield Hospital. This is where he would spend the next 12 days.

“I was well cared for from the moment I came in. Caregivers were by my side the whole time and I had excellent care,” says Walter, who needed oxygen during his stay.

There was one nurse who stood out most to Walter.

“As she gave me oxygen, she sat next to me and talked with me. She said something that has stayed with me – ‘Don’t give up. Don’t quit. Fight. You can do this,’” recalls Walter. “I felt it in my soul.”

Walter couldn’t describe what the nurse looked like due to her mask and the PPE she wore. However, investigating done by the nurse manager of the COVID-19 unit revealed that the nurse was Lisa Lane.

Walter and Lisa reunited recently at Fairfield Hospital, where he put up a banner he made at his screen at his screen printing business to thank all the hospital’s caregivers for their heroic work throughout the pandemic.

Walter recognized Lisa immediately by her voice. When he thanked her for his care and mentioned how she’d inspired him, Lisa hugged him and noted that “it was her honor to care for him and that she didn’t do anything any other nurse wouldn’t have done.”