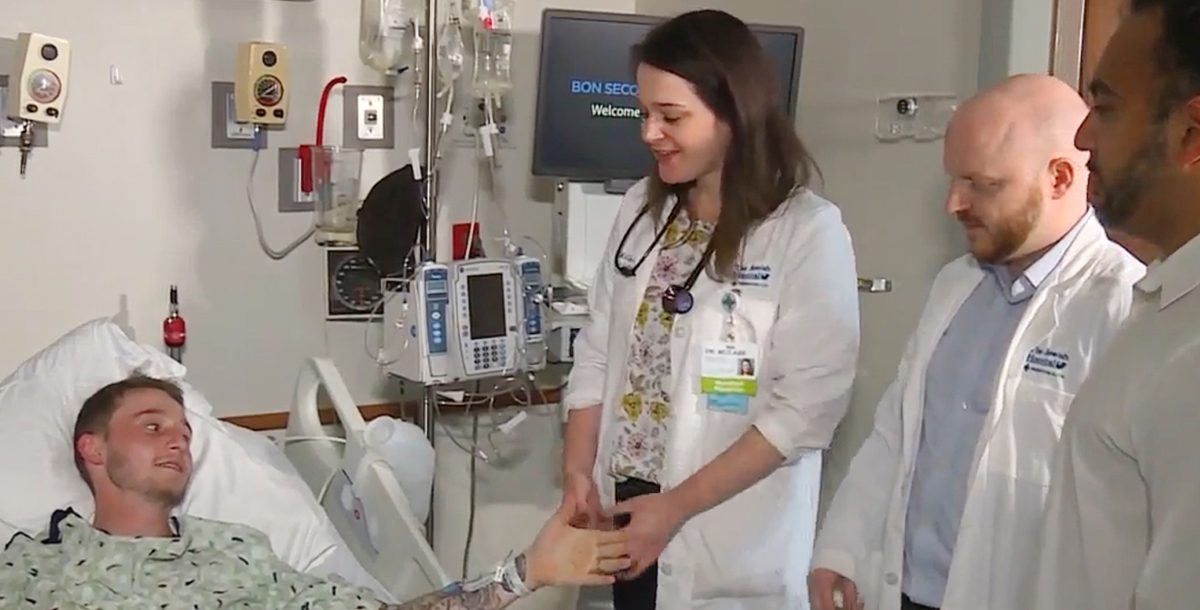 The first vaping-related lung illness Cincinnati patient has been diagnosed.

As of this week, 33 states and one U.S. territory have reported over 450 possible cases of lung illness associated with the use of e-cigarettes or vaping products to the CDC. There have been five deaths during this outbreak as well.

Cody Slagle of Cincinnati considers himself lucky to be in the first group and not the second.

On August 12, doctors at an area hospital diagnosed Cody with pneumonia and sent him home with four antibiotics. The drugs did not help his symptoms and Cody’s condition worsened. He even tried to go back to work on August 15, but his wife had to pick him up.

“I couldn’t feel my arms or hands and I was very tensed up,” recalls Cody.

“I couldn’t eat or go to bathroom. My breathing and heart rate were messed up. I could feel my body aching, getting weaker, and wanting to give up.”

Ten days after his initial diagnosis, Cody came to The Jewish Hospital – Mercy Health, where he was immediately admitted.

“I presented Cody’s case in morning report,” says Imran Naqvi, MD, VP of Medical Affairs at The Jewish Hospital. “We discussed what it could and couldn’t be. Most of the team thought it was pneumonia. But with the health issues that have started coming to light around vaping, this thought was in the back of my mind.”

Cody’s doctors asked if he vaped and the answer was yes. Three years ago, Cody quit smoking and turned to e-cigarettes instead. He felt they were a better alternative to regular cigarettes.

“I had no concerns about my e-cigarettes prior to ending up in the hospital,” says Cody.

Cody’s care team determined he was the first Cincinnati-area patient diagnosed with vaping-related lung illness. After a dose of steroids, he started to feel much better.

“I thank The Jewish Hospital for saving my life,” says Cody.

Dr. Naqvi also notes that Cody had some luck on his side.

“The treatment for this issue is different than that for pneumonia,” says Dr. Naqvi. “Cody’s oxygen levels were at 50 percent, which merits a breathing tube. Fortunately, the steroids kicked in and he avoided a ventilator. This condition can cause permanent lung injury and scarring that can hurt lung oxygenation. Time is of the essence. If we had continued to treat this as pneumonia, the outcome could have been different.”

Furthermore, he doesn’t recommend e-cigarettes as an aid to quit smoking.

“There are evidence-based ways to quit smoking that don’t harm your lungs,” Dr. Naqvi says.

On the road to recovery and with this new information, Cody’s vaping days are behind him.

“My daughter was born in January. I’m not going to let this happen again,” says Cody. “My daughter needs a dad and my wife needs a husband.”

As of now, the CDC does not know what specific substance links these vaping-related illness cases. As the investigation continues, the CDC recommends people not use e-cigarette products. Additionally, people who have used e-cigarette products and experience symptoms including cough, shortness of breath, chest pain, nausea, vomiting, diarrhea, fatigue, fever or weight loss should seek medical care immediately.

Cody couldn’t agree more: “If you smoke vape and start feeling sick, don’t hesitate. Get it checked out.”

Visit Mercy.com to learn more about our healthcare services.