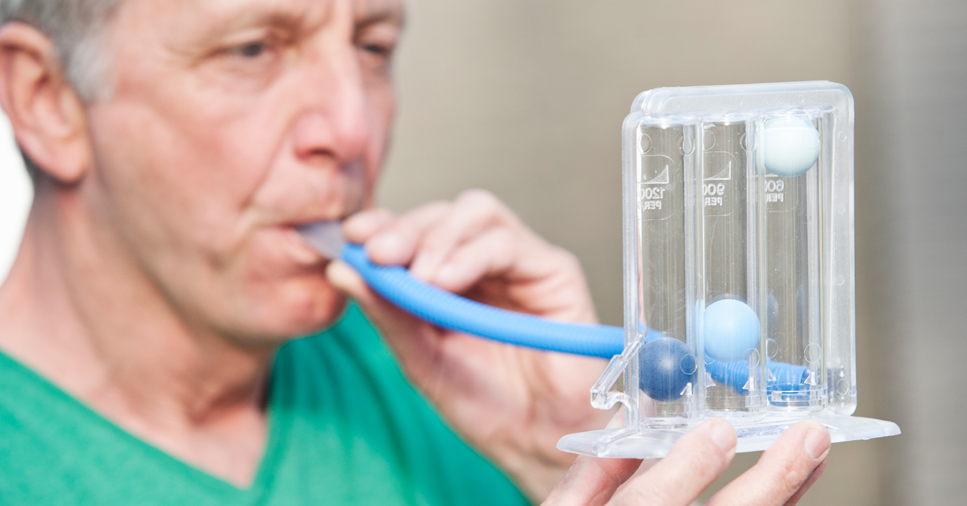 In April 2016, Bill Jackson knew it was time to make a significant change in his life. After smoking for 40 years, Bill had developed chronic obstructive pulmonary disease, also called COPD.

Bill’s physician recommended a consultation with Kamal Chaban, MD at Mercy Health – Lorain Pulmonology. Before making any recommendations, Dr. Chaban ordered tests to “get some numbers” and confirm the severity of the diagnosis.

“As an accountant, I related to his approach,” Bill said. “Upon confirmation, he offered a plan to enroll in pulmonary rehab so I could improve my health.”

Chronic obstructive pulmonary disease is a term used to describe a group of progressive lung diseases. Diseases include emphysema, chronic bronchitis and non-reversible asthma, all of which cause breathlessness.

COPD is estimated to affect more than 30 million people in the United States. While it is closely associated with cigarette smoking, COPD can also be caused by environmental factors. There is no cure for COPD, but with proper diagnosis and treatment, it is manageable.

“Heart and lung disease have a huge impact on our community,” said Mara Barnes, RN, coordinator of Mercy Health’s Pulmonary Rehab program. “Our comprehensive program involves both education and exercise specific to the individual patient to help him or her have a better quality of life.”

At first, Bill was skeptical. He was nervous, and he wasn’t ready to stop smoking. He says that he had been exposed to smoking his entire life, with both of his parents and a sibling who also smoked. But after being introduced to Mara, he felt more confident.

“The first few sessions revealed how out of shape I was, as well as the severity of my condition,” Bill said. “The classes were educational, and it helped to hear the stories of fellow sufferers. It was suggested that I not smoke for at least two hours before each workout. It was a small beginning, but over the seven weeks, I became willing to try.”

How Bill quit smoking to help manage his COPD

After Bill ran out of cigarettes on a Sunday, he was anxious, but he knew had a place to go for help the next day — his Monday rehab session. Over the next five weeks, Bill used the recommended nicotine patches and lozenges to ease physical withdrawals. He says that the next month was difficult, but the support and plan helped him to quit smoking. After completing phase two of pulmonary rehab, he said he knew that “stopping and staying stopped are two distinct things.”

Bill is now enrolled in a maintenance program that gives him unlimited access to the fitness center to continue his routine.

“Mr. Jackson’s success stems from his willingness to participate despite his initial skepticism that he could quit smoking,” Mara said. “He kept with the program and is an excellent example of others who see him faithfully exercising in our maintenance program.”

Bill credits pulmonary rehab as a key factor in bettering his health.

“As I approach two years without a cigarette, I am grateful for the help and support of the professionals and the patients in pulmonary rehab,” Bill said. “The chance to monitor my weight, pulse and oxygen levels and regular blood pressure is a real benefit.”

But the changes aren’t just in the numbers, they’re present in everyday life as well.

Bill said he recently noticed a significant change while mowing his grass. In the past, he would have to stop several times to rest and catch his breath. But when he last cut his grass, he only stopped one time.

“The rattle in my chest and my cough are gone,” Bill said. “I accept the seriousness of my COPD and that it will not go away, but life is so much better.”

If you are experiencing breathlessness and want to learn more about COPD, reach out to our team of caring, compassionate physicians today.

I Quit Dec 29 2018,with the help of chantix. I was diagnosed with copd few years ago. Sometimes it seems like I cough more now and even with my nebulizer and albuteral. IDK. I just thought the coughing and soreness shouldn't be as bad Since I quit.
March 12th, 2019 | 2:53pm