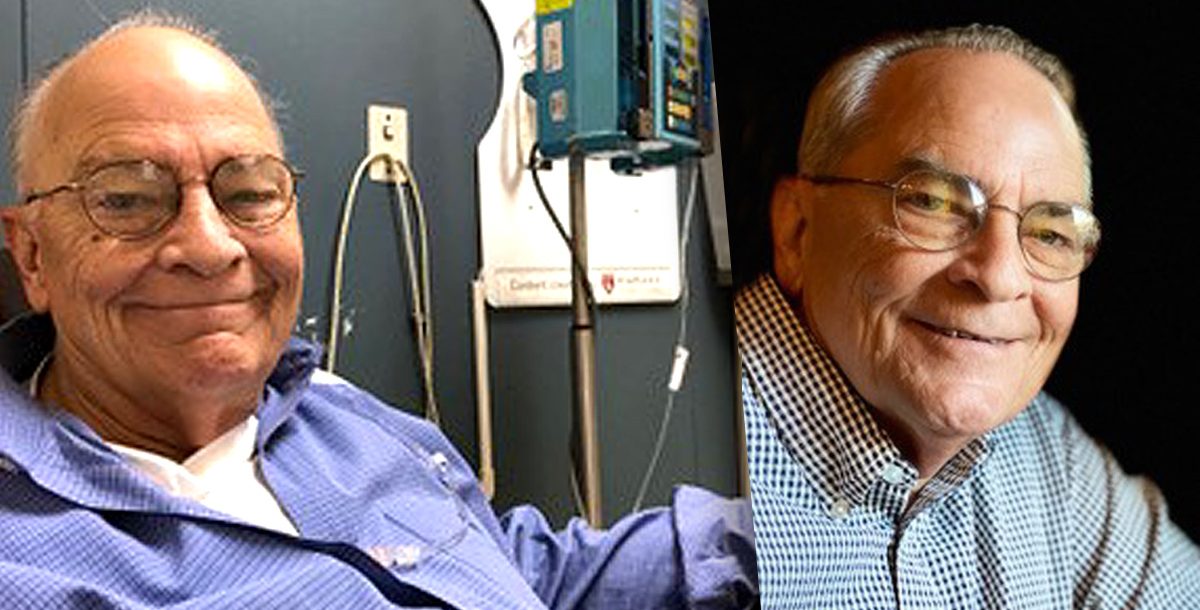 Bob Beats Lung Cancer by Refusing to Give Up

“I am proof that you can beat lung cancer,” Bob Kersey says.

It was only three short years ago that Bob was diagnosed with stage 3 lung cancer.

“It was discovered by accident, even though I firmly believe it was not an accident but a miracle,” Bob shares.

Bob had come in for chest X-rays as part of his pre-operation preparation for a scheduled hernia surgery. The X-rays led his surgeon, Kevin Stigall, MD, to discover a large mass on Bob’s upper lobe of his left lung. After this discovery, Bob’s hernia surgery was put on hold and he was referred to William Skinner, MD, a medical oncologist at Mercy Health – Lourdes Hospital.

“Further tests revealed the stage 3 lung cancer. However, thankfully the cancer had not spread to other parts of my body,” Bob says. “At the time, I had not experienced any other symptoms. So, were it not for Dr. Stigall’s diligence, my cancer may not have been detected in time.”

Due to the size and location of the mass in Bob’s lungs, the cancer was inoperable.

“While I was concerned it could not be removed, my medical team assured me they would do everything they could to fight this with me,” he says.

Bob began a series of 36 radiation treatments followed by six months of chemotherapy. He was extremely nervous about the side effects, having always heard about them with chemotherapy. However, Dr. Skinner and his incredible care team were encouraging and knowledgeable.

“They told me to ‘wait and see,’ that everyone reacts differently to chemotherapy,” Bob shares. “While I did have some trouble keeping my red blood count high enough to tolerate treatment, I did not experience many side effects. I lost my hair, experienced dizziness and only craved vegetable soup and corn flakes – quite a combination, I must say! However, I recognized those side effects were minor, and I was so thankful that those were my biggest issues.”

Throughout the treatments, Bob would have periodic CAT scans, and each one showed the tumor shrinking more and more.

“Finally came one year of immunotherapy before my treatments were complete,” Bob shares. “I was then declared to be in remission! And this past July, I received clear PET scan results.”

When Bob initially found out he had lung cancer, he really thought it was a death sentence. However, throughout the last three years, he came to realize that cancer can be treated and even defeated.

“My personal faith had a lot to do with how I approached the fact that I had cancer. I knew my Lord was in control and I was willing to accept whatever His plan for me was. Additionally, I could not have asked for a better support team than the doctors, nurses and technicians at Lourdes Hospital. They were always willing to do whatever it took to make sure I was getting the best treatment possible.”

While Bob acknowledges he could not possibly thank everyone who played a role in his journey, he would like to call out three by name: Dr. Skinner, Jennifer Strayhorn and Tori.

“Jennifer was and is always there to encourage me,” Bob says. “She told me in layman’s terms what was going on and what test results meant. And Tori was my main nurse during the treatments, administering my medications. She always had a big smile and was somehow able to stick me with needles without it hurting too much.”

Bob shares that his wife, Betty, has been his rock throughout this journey. She was always there when he needed help by doing things he could not physically do.

“She encouraged me when I felt defeated. I am eternally grateful for her continued love and support. The prayers and support of my family, my Sunday school class at First Baptist and so many others that I do not even know have sustained me during a difficult time.”

Overall, Bob hopes that his story is an encouragement and inspiration for others going through their own cancer journey.

“If you ever get the dreaded two words – ‘it’s cancer’ – do not despair, and do not give up,” he shares. “We are fortunate to have medical doctors, nurses and staff to be with us every step of the way.”

Learn more about lung cancer as well as the lung cancer and pulmonary oncology services we offer at Mercy Health.