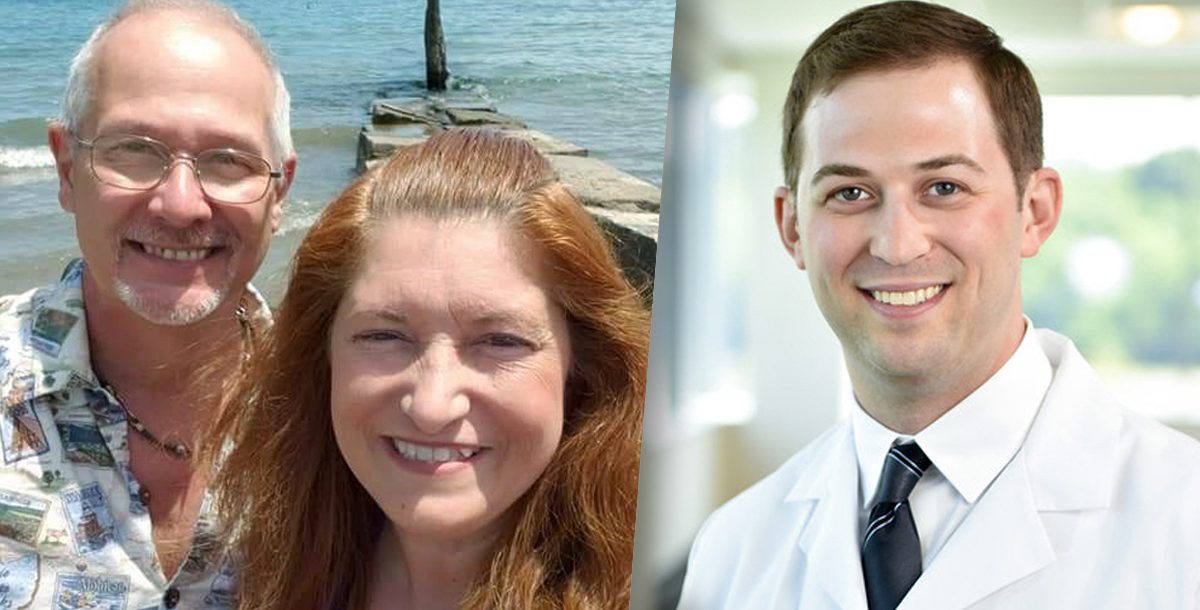 Colorectal Cancer Survivor Encourages Others to Get Screened

Michael Clark, 63, recognizes that the fear of having a screening colonoscopy may have delayed his decision to schedule one. He’s since been diagnosed and treated successfully for rectal cancer.

Now, he has this message for people he encounters:

“I’ve been telling all the guys at work that if you haven’t had a colonoscopy, go get checked. Don’t let the stereotype of the colonoscopy scare you. I should have had one at 60 and probably at 55. Once I went through it, I realized there was nothing to be afraid or scared of.”

Michael has always been a healthy, active man. When he experienced a substantial loss of energy in 2019, he assumed it was because he was getting older and kept going. Then, in March 2020, he noticed significant changes in his bowel movements.

“I knew from experience that I would have a substantial bowel movement once a day. However, I kept noticing that my bowel movements were spindly and thin. I thought maybe it was because I was eating out. I started paying attention to my bowel movements. I eventually saw a bit of red in my stool and knew it wasn’t tomato rinds,” Michael says.

A friend at work referred Michael to a gastroenterologist and Michael had a colonoscopy in April 2020. His gastroenterologist found a stage three rectal tumor during the procedure. In stage three, rectal tumors have grown through the rectal wall and spread to adjacent lymph nodes but not to other organs. While Michael’s tumor was not considered to be aggressive, it was causing a 75 percent blockage of his rectum. This blockage is what was impacting the shape of his stools and frequency of his bowel movements.

Michael needed to have surgery to remove the tumor. His gastroenterologist referred him to Cory Barrat, MD, a Mercy Health physician as well as colon and rectal surgeon (pictured above, right). Dr. Barrat reviewed and explained what he saw on Michael’s CT and MRI scans. He then laid out the action plan, which started with Michael undergoing a course of chemotherapy and radiation to shrink the tumor before surgery.

“I was doing chemo seven days a week and radiation five days a week,” Michael shares.

He adds, “my advice is don’t watch these depressing stories about cancer. That will bring you really down and it’s hard to come back. For two days after my diagnosis, I started getting really down and I decided that the main focus is to stay positive and know you have a tomorrow… You can’t roll over and have people waiting on you. You have wait on yourself. The strength of you, your mind and… wanting to do things is what’s going to get you through it.”

Michael had another colonoscopy following chemotherapy and radiation treatment. They found that his tumor had shrunk substantially. Michael had surgery to remove his tumor in October 2020. Although he should have stayed in the hospital for four days, Michael’s determination to leave prevailed and he went home the next day.

“I knew it was going to be rough, but I knew I was strong minded enough to put up with it,” Michael says. “It’s hard getting in and out of bed after the surgery because your stomach muscles have been cut. I remember I had a chair in the garage that let me look out the driveway.”

Michael had a temporary ileostomy, or bag for digestive contents, to allow his body to heal after surgery. After two weeks, he knew he was ready to have the ileostomy reversed.

Michael continued chemotherapy treatments through January of this year. In late February, a CT scan showed that Michael was clear of cancer. And in March, he had another colonoscopy and his doctor gave Michael a welcome follow-up order.

Michael continues to heal and feels good aside from some lingering tenderness at the site of his ileostomy scar.

“I’m getting my vigor back,” he says.

Michael credits his medical care team as well as his wife, Lisa, for helping him get through his diagnosis and treatment.

“Dr. Barrat and his staff were an excellent team. They were there any time I needed them and always called back… I think he did a great job. I also credit my oncologist and radiologist. They shrank the tumor down to where it was operable,” Michael shares.

He adds, “my wife was behind me 100 percent. She told me that if my activities were limited after surgery or if a needed a permanent colostomy bag, it was okay. It means a lot to your recovery to have that support and it allowed me to just focus one day at a time and take it as it came.”

For anyone experiencing unexpected changes in their energy levels or bowel movements, Michael advises you to always be aware of yourself and how you operate.

“I was always go, go, go. The lack of energy was a big sign that something was wrong. The next sign was the change in my bowel movements. There’s no shame in seeing a doctor and getting checked out. You may be able to avoid getting cancer and have growths treated during a colonoscopy while they are still polyps.”