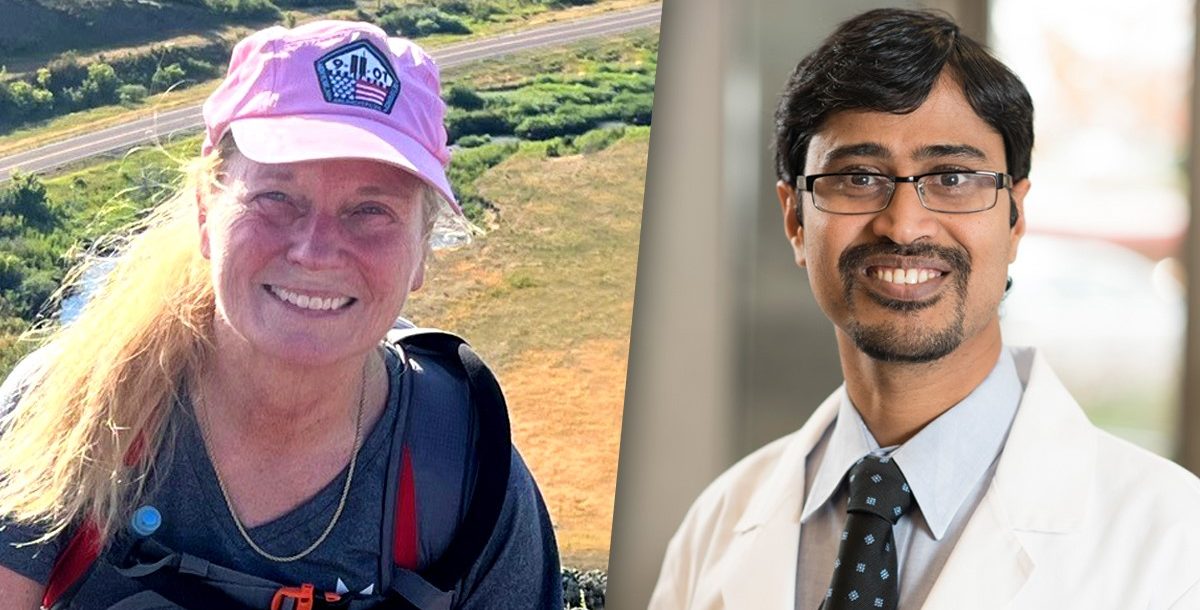 As Donna Zuccala will tell you, she was never sick. But as she and her husband returned home from Florida in March of 2016, something was off.

“We stopped at a rest area, and I fell over,” she recalls. “It wasn’t like me, and it was very odd. I was feeling a little bit weak.”

Back home, Donna (pictured above, left) started feeling better, and she and her husband planned a cookout.

“As I was getting ready, I seemed to be dragging,” she says.

Donna spent much of the get-together laying down inside, feeling exhausted. A couple of days later, her urine looked darker. She thought she was dehydrated, but then she noticed that her skin and the whites of her eyes were yellow.

Donna knew it was time to see a doctor.

“I tried my family doctor, who I hadn’t seen for 10 years because I never get sick,” she shares. “My PCP had retired. It was early April at this point, and they couldn’t see me until October.”

Instead, she visited a local urgent care for bloodwork, telling them that she thought she had pancreatitis. She had them to send her results to the gastroenterologist, who’d performed her colonoscopy eight years previously and called the office to ask that the doctor review the findings.

“I got a call two to three hours later, with the office saying that the doctor wanted to see me the next morning,” Donna says. “He admitted me to the hospital for an endoscopy. After the procedure, he told me I had pancreatic cancer and it was at stage four. I said, ‘What do we do from here?’ I didn’t cry. I’m very analytic. I thought, ‘These are the cards I have. How do I play them?’”

Donna asked her care team which surgeon they would choose if faced with a similar diagnosis.

“The nurse practitioner said, ‘I’ve worked with Dr. Allamaneni, and I really like him,’” Donna recalls.

Soon after, Shyam Allamaneni, MD, one of our surgical oncologists (pictured above, right), met with Donna and her husband to review her case.

“Dr. Allamaneni said the mass was close to the common duct to the pancreas and the liver,” Donna says.  “That’s why I got the symptoms that drew attention to it. Then he dropped a bombshell on us. While he thought I might be a good candidate for Whipple surgery to treat the pancreatic cancer, when he looked at my scan, he saw that my celiac artery had never formed properly.”

The result was that Donna’s liver was getting its blood supply from the area where her cancer was located. Dr. Allamaneni had Donna see a vascular surgeon to determine if they could restore blood supply to her liver directly from the aorta.

Luckily, the answer was yes!

Sixteen days after her diagnosis, Dr. Allamaneni operated on Donna at The Jewish Hospital – Mercy Health. He completed the Whipple procedure while a vascular surgeon performed the reconstruction on her artery to supply blood to her liver.

Donna was hospitalized for 12 days following surgery, followed by a 10-day stint at a rehab hospital. She went home with a feeding tube. When it got blocked and wouldn’t clear, Dr. Allamaneni ordered a CT scan, which unfortunately revealed a new concern.

“Dr. Allamaneni told us that the CT scan showed that I had five lesions on my liver. The cancer had metastasized, and I needed to talk to an oncologist,” Donna shares.

The oncologist warned Donna that her chemo regime would be very difficult.

“It was true,” she adds. “I was the first in the chemo center and the last to leave. One of the drugs they had to give me I called Lucifer for a while, but then I renamed it when my cancer antigens started to come down. It’s the pancreatic cancer that is Lucifer. The drugs are the warriors.”

Donna credits the support of her husband, now deceased, her best friend Stephanie, a tight circle of friends and her children with helping her get through six months of a grueling chemotherapy regime that made her feel incredibly ill.

She completed her course on the Wednesday before Christmas of 2016 and has remained cancer-free for six years. She’s defying the prognosis for most pancreatic cancer patients and is making the most of her life.

Donna and her husband went on a bucket list trip in 2019, the same year she started a part-time customer service job that has now grown into a full-time role as a licensed insurance agent.

This year, Donna, now 67, hiked 35 miles in six days off the trails in Glacier National Park with her son, who is a nurse practitioner specializing in wilderness medicine. She’s walked in the PurpleStride pancreatic cancer walk, bodysurfed in Florida and started to board and train dogs at her home.

“After the Whipple surgery and chemo, the doctors thought I might have one to two years to live,” Donna says. “After I made it past two, they said I had two to five years. That’s why we did the bucket list trip.”

Donna shares that she truly appreciates the care she received from Dr. Allamaneni.

“I love Dr. Allamaneni. He’s very clinical at first and ends up being very personable, both of which I value. I don’t like things candy-coated and I don’t like being left in the dark. He was straight with me.”

While Donna was a person who typically would wait out an illness until she felt better, she cautions people to know themselves and act accordingly.

“If something is way off the norm for you, make them listen to you,” she says. “I’d never been jaundiced or had dark urine. I knew it wasn’t good and had to be looked at. The most frustrating part was not getting someone in my primary care office to look at me when I needed help. If your symptoms are something you’ve never experienced before, don’t be afraid to demand to be seen and refuse to leave.”