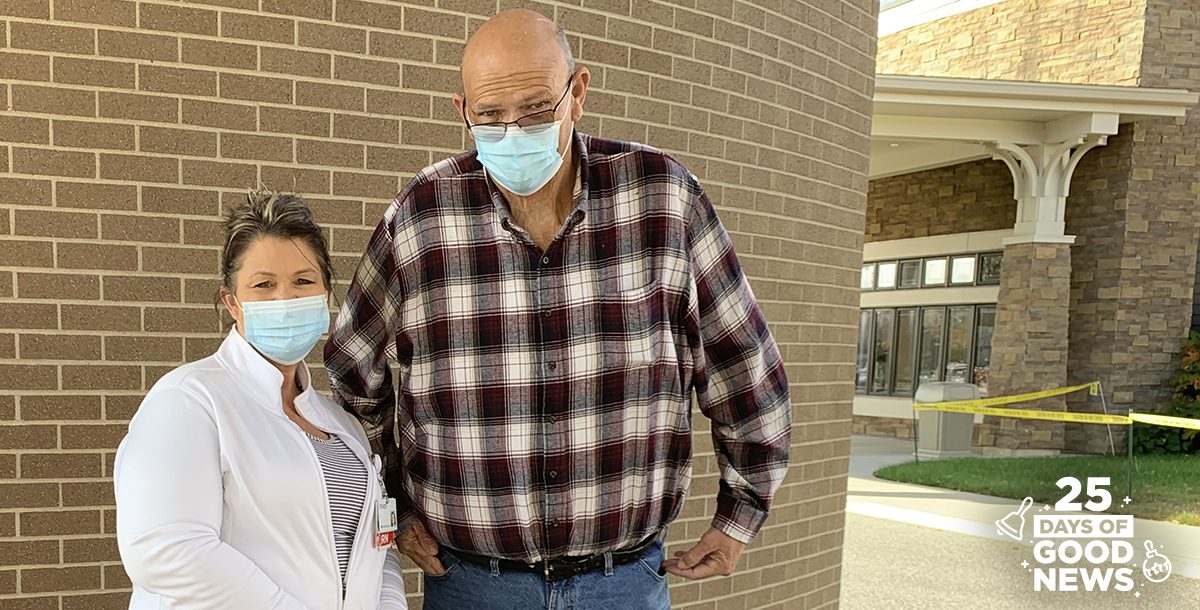 Dell Gets A New Liver, A New Kidney and A New Best Friend

When Dell Elliott and his loved ones gathered together to celebrate the one-year anniversary of his liver and kidney transplant, there was a special guest at the party: Stacey Brooks, a nurse at Mercy Health – Lourdes Hospital.

Over two years Dell had regular medical visits for lab work and paracentesis, a procedure that removes fluid from the stomach through a slender needle. And during those visits, Stacey cared for him and the two developed a friendship.

“She is amazing nurse,” Dell shares. “Stacey has a great personality and I love her to death. We spent a lot of time together. I’d see her just about every week and I set my appointments up to be there on the days when she was working.”

Dell, 54, was originally diagnosed with nonalcoholic steatohepatitis (NASH), a liver disease, back in 2015.NASH causes scarring of the liver and one of its side effects is a buildup of fluid in the stomach.

“They put you on medicine at first to control the condition, but it’s something that progresses and there’s no cure for it,” Dell says.

At first, Dell needed to visit the hospital every three or four months to drain the accumulated fluid.

“Then it got to where I was doing it every week,” he says. “In fact, I set a record for most liters taken off at Lourdes Hospital.”

Dell’s condition was deteriorating, but luckily things were about to change.

“He was finally placed on the transplant list for a liver,” Stacey shares.

“You go on the list and wait until they find a match,” Dell shares. “It can be a long, drawn-out process, but I didn’t wait that long. I got on the list in January 2020 and got the opportunity for a liver that August.”

However, while he was waiting for his new liver, Dell contracted COVID-19. It ravaged his kidneys and he had to start dialysis treatment. It was then determined that Dell would also need a new kidney. Dell had seemingly recovered from COVID-19 when they got the call about organs being available, so Dell and his wife drove four-and-a-half hours to the University of Louisville for the transplants.

“They had a liver and a kidney for him,” Stacey says. “They had him prepped and on way to the operating room when his COVID-19 test came back positive. His wife called me so hurt and upset, because she knew it had been over a month since he had COVID-19. However, the medical team wanted Dell to wait until he tested negative because they didn’t want to risk the new organs.”

Dell and his wife remained faithful though. Dell even told Stacey “You know, God has a plan and it has to be his timing. The person who got those organs was meant to have them and when the time is right, I will get mine, too.”

Dell returned home and continued his dialysis treatment. He was actually getting ready to leave home for dialysis on the morning of Oct. 7, 2020 when the University of Louisville’s transplant center called again. He and his wife headed to Louisville again, and later that day Dell received his new liver. On Oct. 8, 2020 he received a new kidney.

“He always remained faithful with God and never doubted Him,” Stacey says, who kept in regular contact with the Elliotts.

After receiving both his new liver and kidney, Dell left the hospital and came home on Nov. 11, 2020.

“I would like to say thank you to all the surgeons and nurses there. They are an awesome bunch,” Dell says. “I give it all to the good Lord. He’s the one who gave it to me and pulled me through it.”

Dell is also very grateful for the changes the transplants have brought to his life and for the donor who made those changes possible.

“I am sorry for their loss, but I sure appreciate that person for being an organ donor. Most don’t realize that people need organs every day,” Dell says. “Before, I couldn’t do something without someone being around me because I’d go out in the yard and pass out.”

When the one-year anniversary of his transplant came up, Dell’s family wanted to do something special.

“His wife told me they were having a one-year post transplant party for him and asked me to come. They did not tell Mr. Elliott,” Stacey says.

“We had a celebration and Stacey surprised me,” Dell recalls. “Most of my family and my church came to celebrate. I’ve got a good church family and that makes a big difference.”

“I have learned so much from Dell and his family,” Stacey adds. “The faith that they had and the support from their family, church family and friends was overwhelming. No matter what they were facing, they never gave up.”