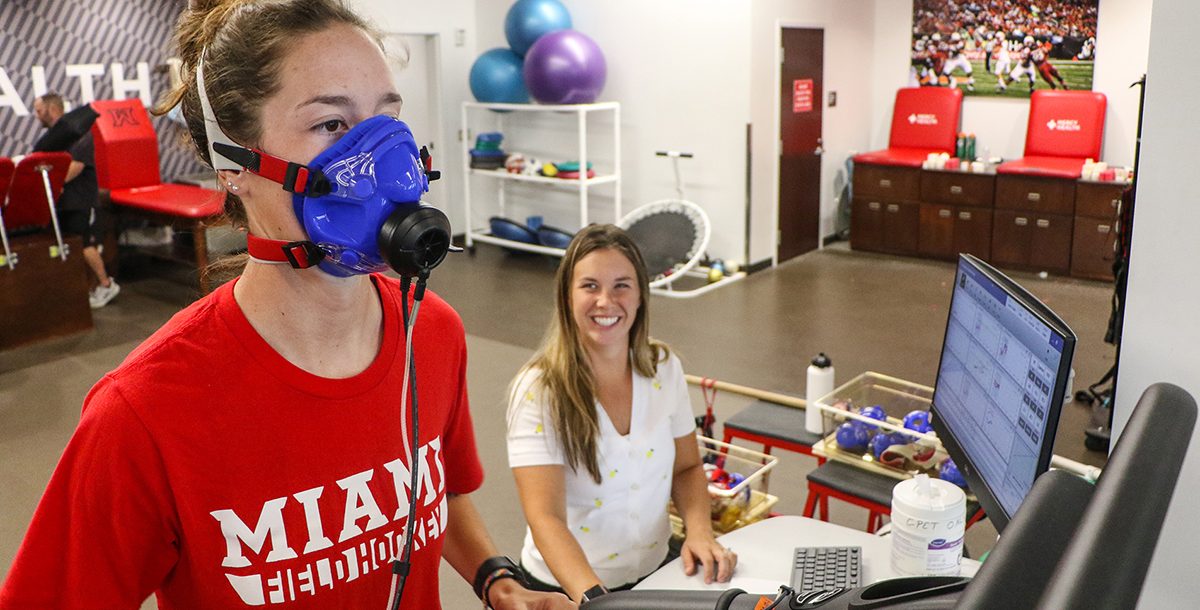 Twice a year, the field hockey team at Miami University dons a specialized face mask connected to a computer. They then run on a treadmill for 10 minutes that steadily increases in speed. Once the run is complete, the computer gives team coaches an accurate read-out of the maximum volume of oxygen each woman’s body is able to process while exercising.

“Theoretically, players with a higher VO2 max number can perform at a higher level for a longer amount of time during a game,” Erich Y. Groezinger, MS, MBA, a sport performance coach with Miami University’s athletic department, shares. “For the past seven years, our department has worked with Mercy Health, our health partner, to give student athletes access to this kind of testing. The testing is expensive and usually limited to professional athletes.”

Erich administers the first test of the year shortly after the team returns for the start of the school year in August.

“The test gives us an idea of how fit the team is and what we can expect as well as the maximum potential an athlete can reach when it comes to fitness,” he says. “It also shows us who did the summer conditioning.”

As a high-performance consultant, Erich uses the information gathered from the test to create a framework for the coaches to follow throughout the season.

“The information we gain from the VO2 max test gets us started,” he explains. “Thanks to the test, we know who needs extra preseason conditioning. In August, I can tell you what I expect the team’s effort to be in October. It also allows us to make day-to-day adjustments in performance expectations based on illness, injuries and games that run long to help team members reach their maximum potential in a reasonable way.”

The women then undergo the test again in February at start of their spring season.

“We expect most of the team to be at or above 50 ml/kg/min,” Erich says. “The average volume of air a recreationally active college-aged male can process is 45 and for a female, it’s 40. On the women’s field hockey team, we have a number of athletes reaching the high 40s and several in the 50s. Male and female elite runners test in the 70s and 80s because they have no body fat and very little upper body muscle development.”

There are physiological limits on how much oxygen a person’s body can process based on the volume of their lungs.

For that reason, the VO2 max test results are reported in two ways:

“An athlete who is six feet tall will have a different relative VO2 max measure compared to one who’s five feet tall. Therefore, it’s the second VO2 max measure that allows us to compare them,” Erich shares. “Our team is very competitive, and the athletes have undergone this testing since they were freshmen. They know their numbers and how they’ve improved, and they compete against each other on their relative number.”

While the test is a good measure of the conditioning program, it also gives Erich and the coaches something more.

“There’s a line graph when you do the test that represents oxygen intake, and you are looking for it to plateau,” he explains. “That indicates when the athlete has reached their max. If you can hit that and sustain that effort, that’s pure mental grit. It’s not common but it’s clear when you see it.”

Learn more about the human performance and sports performance assessments we offer at Mercy Health and how they can help you reach your fitness goals.