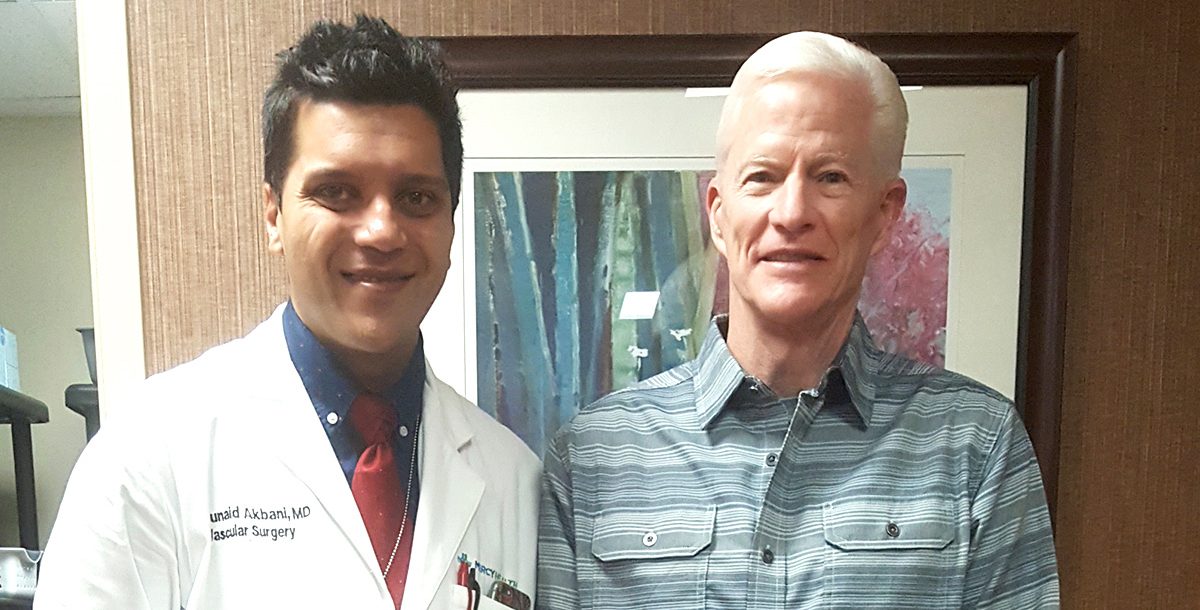 Bernard’s Story: Healthy as Ever After Aneurysm Repair Procedure

For the most of his life, Bernard Flath has been the picture of health. Even now at age 69, he is active and at a healthy weight.

With the exception of his high cholesterol levels, Bernard has been feeling great. However, he knew he needed to listen to his primary care provider when she encouraged him to undergo a few preventive screening tests.

As a retired emergency room nurse, Bernard could tell when his cardiologist found something of concern during an abdominal exam.

“He said we should get an aortic abdominal aneurysm screen done right away,” Bernard says. “I asked him if I had a pulsatile mass in the abdomen, which is swelling in the abdomen that has a pulse or a throbbing. I hadn’t noticed it before but there it was, and it was now apparent.”

Aortic abdominal aneurysms run in Bernard’s family – his mother had been diagnosed with one although it never required surgical treatment. This condition occurs when an area of the aorta, the main blood vessel supplying blood to the abdomen, pelvis and legs, becomes large and balloons out. The danger of this situation is that the aorta can then burst.

Knowing that a pulsatile mass is a sign of abdominal aneurysm, Bernard followed up by scheduling an ultrasound. The photos showed that he not one but two aneurysms. The Mercy Health Toledo ultrasound technician recommended that Bernard see a vascular surgeon. From there, he was referred to a reputable and state-of-the art surgeon, Mohammed Akbani, MD.

Bernard called Mercy Health – Heart and Vascular Institute, Vascular Surgery on a Friday and shared that while it was not an emergency, he’d like to make an appointment soon. That Monday, Dr. Akbani called to get him scheduled.

“I remember him telling me that he was looking at my scans the night before and I was immediately impressed as that meant he was looking at them on a Sunday,” Bernard says. “Dr. Akbani explained that, yes, I did have two aneurysms and that there were a couple of ways they could be addressed.”

Bernard and his wife met with Dr. Akbani at Mercy Health – Perrysburg Hospital where the surgeon thoroughly explained endovascular aneurysm repair. With his medical background, Bernard knew that previously treatment would mean a huge incision in the abdomen and major recovery time. He was thrilled to learn Dr. Akbani could repair his aneurysms with a minimally invasive procedure involving a small incision in Bernard’s femoral artery and a one-night hospital stay.

After lots of research and much prayer, Bernard scheduled his surgery with Dr. Akbani at Mercy Health – St. Vincent Medical Center.

Dr. Akbani shares that he used several stints and interconnected them to address both aneurysms at the same time. Unique to the region, this procedure helped preserve blood flow through the arteries allowing for increased circulation in the pelvis.

“I went home with two bandages and instructions not to move furniture for three days,” Bernard shares. “Instead of a major abdominal surgery and the recovery that goes along with that, I could exercise, I could go for a walk, I could do almost anything I wanted.”

Now what about that high cholesterol? Bernard says a lifestyle change that includes a steadfast plant-based diet has significantly reduced his cholesterol when nothing else was working.

With his new stints and his new diet, Bernard has completely returned to his active life. He credits Dr. Akbani and compliments the many Mercy Health nurses for their knowledge, professionalism and compassion.

Learn more about the heart and vascular services we offer at Mercy Health.