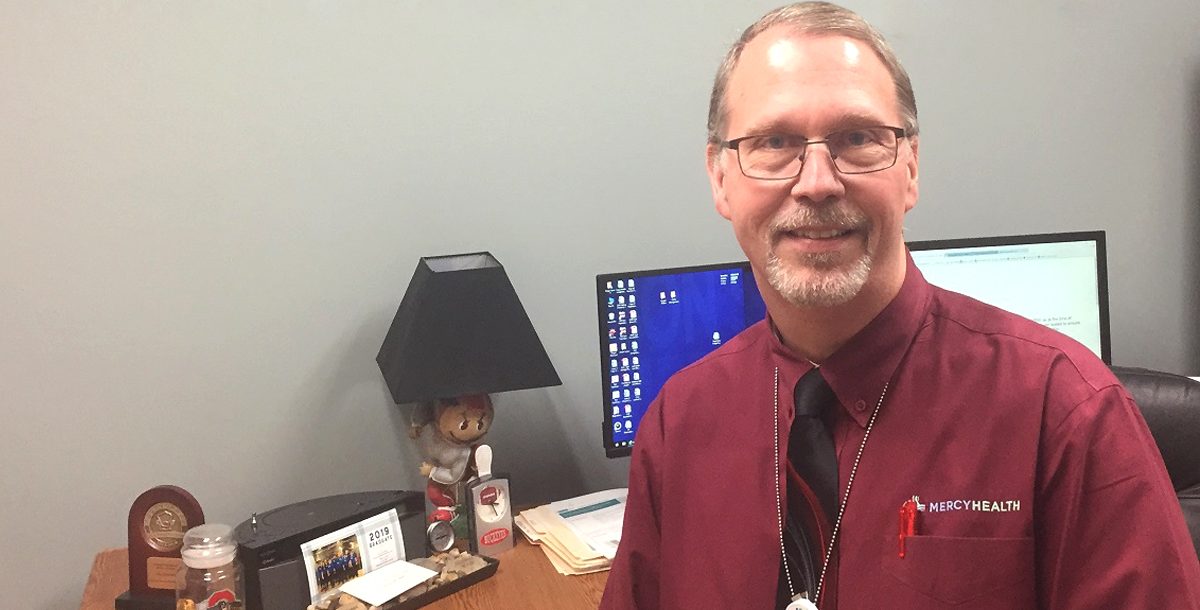 A Second Chance: The Power of Organ Donation

Considering Kevin Griggs has worked for the same health care system for more than 40 years, the organization in his office is spectacular. And on the respiratory director’s desk is a plaque that merits a special place in his heart.

“It’s not by accident,” Kevin says of the plaque’s placement. “I enjoy that it stimulates conversation.”

The plaque recognizes Mercy Health – Springfield Regional Medical Center and its extraordinary efforts to build awareness for organ donation. Five years ago, Kevin was asked to chair this campaign and accepted immediately. The cause is near and dear to him.

“We Honored that Request.”

In 2002, Kevin took his son, Ryan, to get his driver’s license. When Ryan was asked whether he would like to be an organ donor, the 16-year-old had a memorable response.

“Ryan looked at me and said, ‘Dad, if I’m dead, I’d prefer that people got the benefits of what I could donate.’ So, he made that decision,’” says Kevin.

In 2006 and 9 days before his 20th birthday, Ryan was killed in a car accident as a passenger. After receiving the painful phone call, Kevin and his wife, Leann, were asked about Ryan’s wishes.

“Of course, you’re in shock,” Kevin explains. “But the day Ryan got his driver’s license was vivid in my memory. His mother and I honored that request.”

Twenty-eight different organs were harvested from Ryan, including corneas that helped individuals regain sight and skin for burn victims. (The human body has 78 organs, including 22 internal organs.)

“The thing that brought us comfort, first and foremost, was our faith,” says Kevin. “But then, also, the fact that Ryan was able to help people even after his life ended. It still touches us today when we hear a story of someone making an organ donation.”

“Thousands of People are Waiting.”

Kevin and his respiratory team manage ventilators for patients on life support. Therefore, they are close to families making agonizing decisions about things such as organ donation.

After one memorable organ donation case, the hospital observed this solemn occasion with a walk of honor. As many as 100 staff members, including Kevin’s team, lined the hallway from the cardiovascular intensive care unit to the elevator. They paid their respects to the deceased patient and family during transport to the operating room.

“There are literally thousands of people who are waiting for a second chance,” says Kevin. “They’re waiting for an opportunity to get away from a dialysis machine, or be able to participate in normal activities that many of us take for granted. It might be someone who requires a heart or lung transplant and is barely functioning right now.”

Kevin’s effort to support organ donation is one of the many reasons he was recently Springfield’s nominee for the Ohio Hospital Association’s Health Care Worker of the Year. And while Kevin is a true leader who’s countless initiatives help others, he’s not likely to brag.

He’s more likely to discuss being born at Mercy Medical Center and starting to work at the hospital two days after his 18th birthday. In fact, his long tenure included a period when the respiratory supervisor office was located in the room where he was born.

“I haven’t really gone very far in life,” Kevin says jokingly. But the numerous families he has helped, as well as those who learn the story behind the plaque on his desk, know otherwise.

How you can best prepare for organ donation:

God bless Kevin and those who promote organ donors. Much like Kevin my cousins very young daughter was killed in an auto accident. She was studying to be a nurse. She also chose to be an organ donor. I was so moved by her decision that I took the steps to be listed as a donor. In addition, my husband is battling liver disease and may someday need to be placed on a list. God Bless all you do for Mercy and patients.
July 11th, 2019 | 6:11pm

I truly believe in being an organ donor, to give a gift (second chance) to God's children in need. I am a donor myself it's noted on my driver's license. A bumper sticker I seen once " Don't take your organs to Heaven, God knows we need them here" this says it all. Ryan was a wonderful young man who was taken from us suddenly to know he has given other God's children a second chance a decision at a young age can only warm your heart. Ryan, thank you! We miss you and your smile.
July 18th, 2019 | 9:11pm