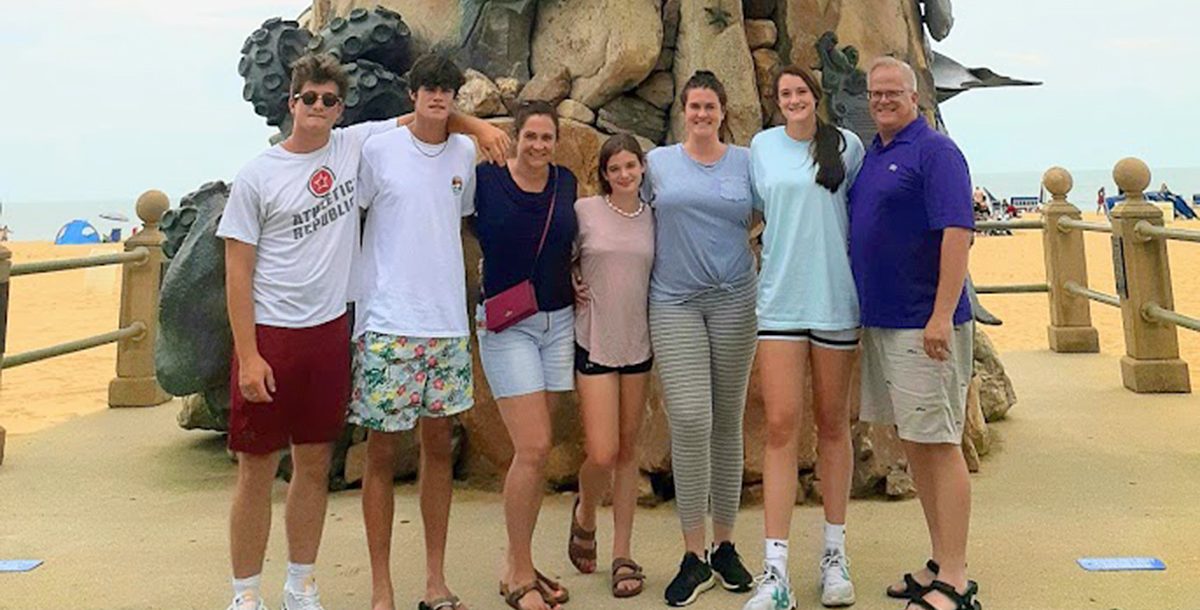 This Father’s Day, Jon VanSlooten will be spending it with his wife and five children. He shares that this  might not have been the case if it wasn’t for Dr. Ahed Nahhas, MD, a Toledo clinic cardiologist, as well as the emergency room staff at Mercy Health – St. Anne Hospital.

On March 25 of this year, Jon drove himself to the Mercy Health – St. Anne Hospital emergency room because he was having chest pain.

“I don’t remember leaving my house or driving to the hospital,” he shares.

When he arrived, the emergency room team did an ECG and checked his blood pressure. It was slightly elevated but had no signs of a heart attack. However, subsequent ECG showed clear evidence of a large heart attack and Dr. Nahhas was called in.

“As I arrived in the ER, I was told by the team that Jon had coded. They were performing advanced cardiac life support,” says Dr. Nahhas, who also serves as medical director of interventional services at St. Anne Hospital.

The team performed intubation, constant chest compressions, advanced cardiac life support (ACLS), along with using the automated external defibrillator (AED). It is rare to survive hospitalization if there is no response and no heartbeat after 20 minutes of resuscitation.

“Although his color was blue and he was not responding to anything, with Jon being so young and in good health previously, I knew he had a chance of survival if we continued to perform CPR,” says Dr. Nahhas.

After 41 to 42 minutes of active advanced cardiac life support, they finally got a pulse from Jon. They took him directly to the cath lab where Dr. Nahhas performed emergency catheterization with primary angioplasty and stenting of the right coronary artery to open a complete blockage. He also placed a hypothermia catheter to decrease the risk of brain damage caused by the prolonged cardiac arrest.

“Within minutes of placing the stent and reestablishing normal flow to his heart, Jon’s color started to come back and he was moving his toes,” says Dr. Nahhas. “I asked him if he could hear me to shake his head and he did.”

Over the next few days, Jon continued to recover. When he was strong enough, he was sent to inpatient cardiac rehab. Finally, Jon was released from the hospital on April 14th.

“In the almost 28 years of practicing medicine, I have never experienced anything like this,” Dr. Nahhas shares. “From coming in with minimal signs of a heart attack, to having no heartbeat for close to 42 minutes and then making a full recovery is miraculous. I believe he had God protecting him.”

Jon’s heart muscle function is back to normal. He has made some diet modifications and is taking his medication as well as exercising.

“I was aware I had high blood pressure and some cholesterol issues. I had been prescribed blood pressure medication, but I didn’t take it. I just figured it was fine and I could take care of myself,” says Jon. “Part of the reason I want to share my story is to spread the word to people who aren’t taking this type of stuff seriously.”

Jon had a follow up visit with Dr. Nahhas this past week and is back to normal activity. He is completely asymptomatic and his echocardiogram showed normal heart muscle function.

“I owe my survival of this to everyone involved,” Jon adds. “I don’t remember how many people there were in the ER working on me but the persistence of Dr. Nahhas and the team to keep going is why I am here today.”

Learn more about the emergency services as well as the heart and vascular services we offer at Mercy Health.