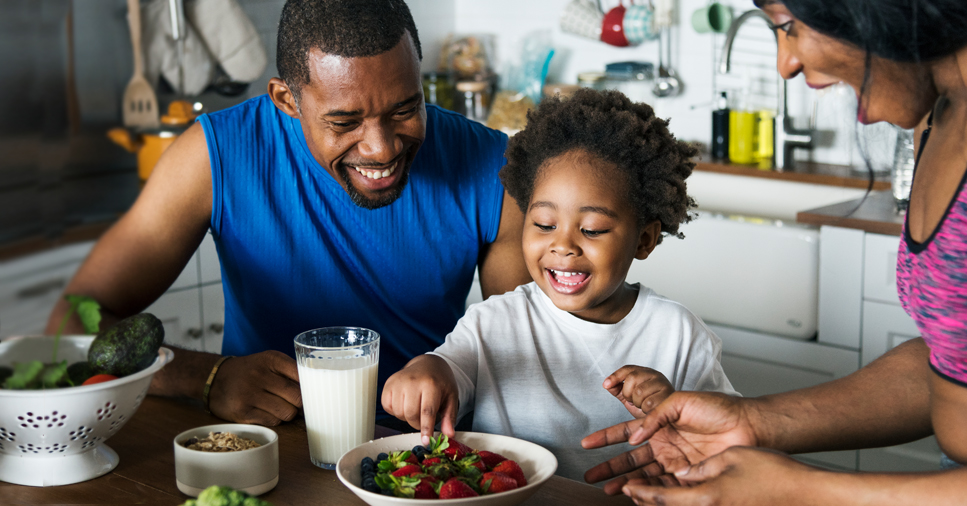 In this episode of the Mercy Health Medical Minute on 700WLW, Mike McConnell interviews Family Nurse Practitioner Rachael Doll. She discusses family fitness and healthy habits in her work at a school-based health center.

Fitness is an important aspect of maintaining healthy habits. It is much easier to keep kids on track if parents are right there doing it with them.

Mike McConnell: We’re talking about family fitness this week and I would imagine that you are dealing with kids first and foremost right?

Rachael Doll: Yes, I deal with kids but my school-based health center is a little different. We are open to the community so I see families and patients of all ages from infants to elderly.

Is healthiness a habit that runs in the family?

Mike McConnell: So, if a kid comes in and he’s looking unhealthy, let’s say he’s on the larger side, do mom and dad tend to look similar? In other words, bad habits run in families, is that safe to say?

Rachael Doll: Yes, that is correct.

Mike McConnell: How do you gingerly go about addressing that issue?

Racheal Doll: A lot of times the parents or kids will bring it up. They are interested in getting healthier. If they bring it up then that’s one way I start talking about it. Another is I always talk about healthy habits. So, I talk about the 5, 4, 3, 2, 1 rule. Every day, a kid should have five fruits and vegetables, four glasses of water, three good laughs, two hours or less of screen time and one hour of exercise. They should also be getting 8-10 hours of sleep. When we talk about that, I always ask how much physical activity they are getting or what they like to eat. Then I use that as a segue to talk about fitness and healthy habits.

Mike McConnell: If they’re at school, is recess as energetic as is used to be? Is it a time to stand around and check your phone or do kids actually run around and get some exercise?

Racheal Doll: The younger kids usually run around and get exercise. The older kids, fifth and sixth graders, are less active and tend to stand around a bit more.

What about physical activity for kids?

Mike McConnell: So how much time should be spent on physical activity and what exactly does that mean?

Racheal Doll: About an hour is recommended. Do anything you enjoy that gets you to sweat, gets your heart rate up and gets you short of breath every day.

Mike McConnell: You also recommend warming up and cooling down?

Mike McConnell: Did you do that when you were a kid?

Rachael Doll: Not necessarily but I think all kids when they’re playing tend to maybe go down the slide a few times or just run around a little before they start really sprinting and jumping.

Which form of exercise is more important?

Mike McConnell: The four types of exercise we have are strength, endurance, balance, and flexibility. Are any of those more important than any of the others?

Rachael Doll: Based on research no. All four are important, they all have great benefits and it’s really important to incorporate all of them into your physical activity routine.

What about parents’ healthy habits?

Mike McConnell: Since you see parents too, if mom and dad are 35 to 40 and they say they’ve done nothing since high school to be physically active, what do you tell them to do?

Rachael Doll: So, start with just 10 minutes here and there, maybe instead of driving down the street to the store, walk or bike, take the stairs instead of the elevator. If you have kids, you can do a push-up or sit-up contest in the living room or just put on some music and dance in the kitchen while you’re making dinner. Those little bits of exercise here and there throughout the day make it fun and you work your way up to sixty minutes.

What is the end-result of healthy habits?

Mike McConnell: Have you had much success? Have you had someone walk in and look like a different person a year later?

Rachael Doll: Yes, and I see a lot of health benefits in my patients. Beyond losing weight I see improvement in blood pressure, cholesterol and reducing the risk of diabetes. I have a lot of patients who come in, they’re overweight. Their blood pressure is high. They might be pre-diabetic or have diabetes and once they start eating healthy and working out they come back three or six months later and their numbers in their blood-work have improved greatly.

Mike McConnell: Through doing what you do, do you think the biggest cause of weight gain or obesity is poor diet, lack of exercise or both?

Rachael Doll: It’s a combination of both. I think that in children, we are seeing that kids aren’t moving, they’re spending too much time in front of the TV, computer or on their phones. But, the diet is a huge thing, especially in American culture.

If you want to make a lifestyle change and start introducing healthy habits to your family, make an appointment with your Mercy Health provider.