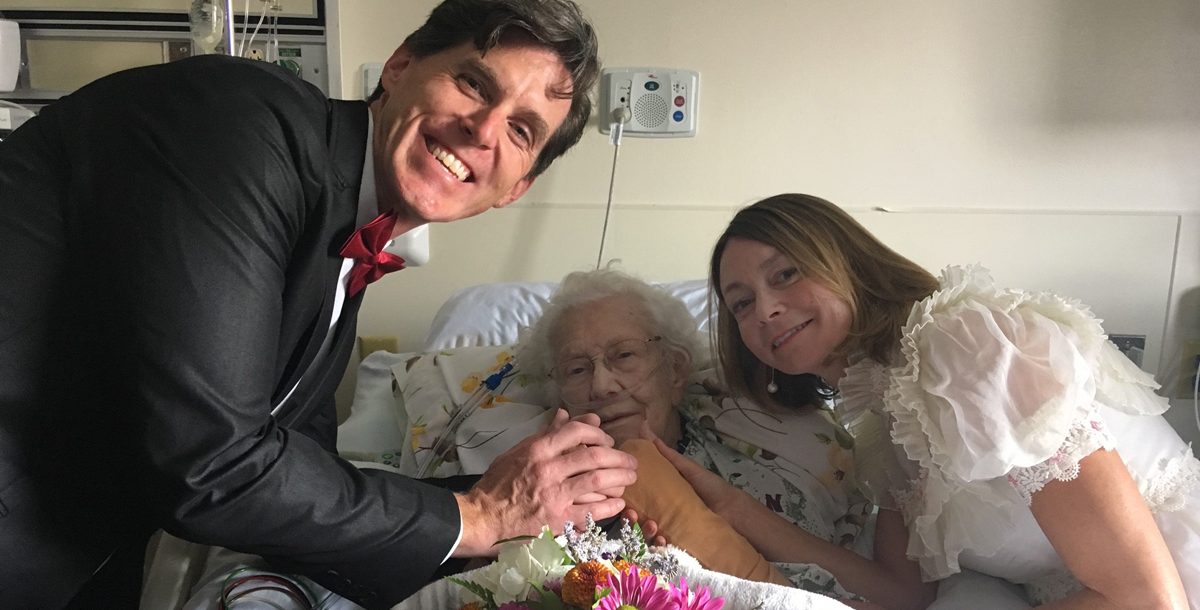 Velda Dudley and her granddaughter, Amanda McCracken, were exceptionally close.

Their bond formed and grew because Velda lived with daughter, Patrice, along with Amanda, Patrice’s daughter, for more than 30 years.

At 100 years old, Velda was delighted when Amanda met and fell in love with Dave Butler. The couple got engaged in July 2019 and were planning to wed in July 2020 in Colorado where they live. Velda was excited for the wedding and looking forward to it. 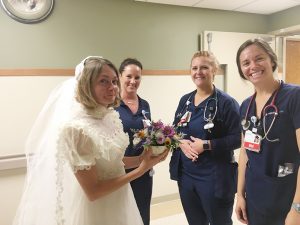 “My mother had been praying hard and looking forward to this day for years,” says Patrice. “My daughter was equally excited as her grandmother was integral to her life.”

Realizing that travel would be tough for Velda and other older relatives outside Colorado, the couple planned a smaller, full-fledged wedding to take place on October 11, 2019, in Cincinnati, OH.

Unfortunately, Velda came down with pneumonia and then congestive heart failure at the end of August. After 10 days at Mercy Health – Fairfield Hospital, she rallied, seemed to be doing well and went to a rehabilitation facility to regain her strength. However, her health took a turn for the worse and she was readmitted to Fairfield Hospital on Wednesday, September 18.

“It became clear that she was not going to leave the hospital this time,” says Patrice.

Amanda, just returning to the country from a trip to Peru, rushed straight to the hospital. Dave also quickly flew out from Colorado so they could have a wedding ceremony in the hospital on Friday, September 20.

Coincidentally, Patrice had just brought home her own wedding dress from a relative’s house where it was stored for 46 years. The nurses helped Amanda find a place to change. She opened the box, tried on the dress and it was a perfect fit. It was magical. 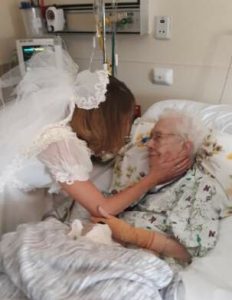 “It seems saccharine to say it, but the nurses were angels… The nurses helped with happy sisterly care to get her buttoned, arrange her dress and get her veil on,” says Patrice.

“They made sure mom’s hair looked great and rearranged the room so people could come in. Chaplain, Tammy Eady, brought in flowers before the wedding for Amanda to carry. Everything was understated but perfect for the situation.”

Velda’s care team also arranged for cupcakes, sparkling grape juice, and a little cake for the bride and groom. One of nurses played wedding music on her phone as Amanda walked down the hallway and into Velda’s room.

Just 40 minutes earlier, Velda had been agitated – a result of her medication – but Patrice reminded her of the wedding that was about to happen.

“Only by the grace of God did this all work. A significant calm fell over her and she was fine – the best that I’d seen her in at least two days,” says Patrice. “It was the last time we would see her being normal.”

When the groom came in, Velda reached out and said, ‘There you are, David.’ She said the blessing she would have said at the October wedding and did it as if she wasn’t sick. She also smiled broadly as she congratulated the bride and groom.

“The nurses were crying and taking videos,” Patrice recalls. “They were as much a part of the whole thing as we were. They had so much enthusiasm, care, empathy and worked really hard to make everything the best it could be.”

Velda passed away the following Monday, September 23 with her lifelong wish of seeing Amanda wed fulfilled. Amanda and Dave had their Cincinnati wedding as planned on October 11 and will have their Colorado wedding in July 2020, where a special guest will be in attendance – Velda’s great grandchild!

“Mom had said to Amanda, ‘Why wait until July to have the wedding? You could have a baby by then. I’ve waited long enough,” Patrice recalls, noting that Amanda is now expecting her first child.

Amanda’s family is growing, just has Velda would have wanted.