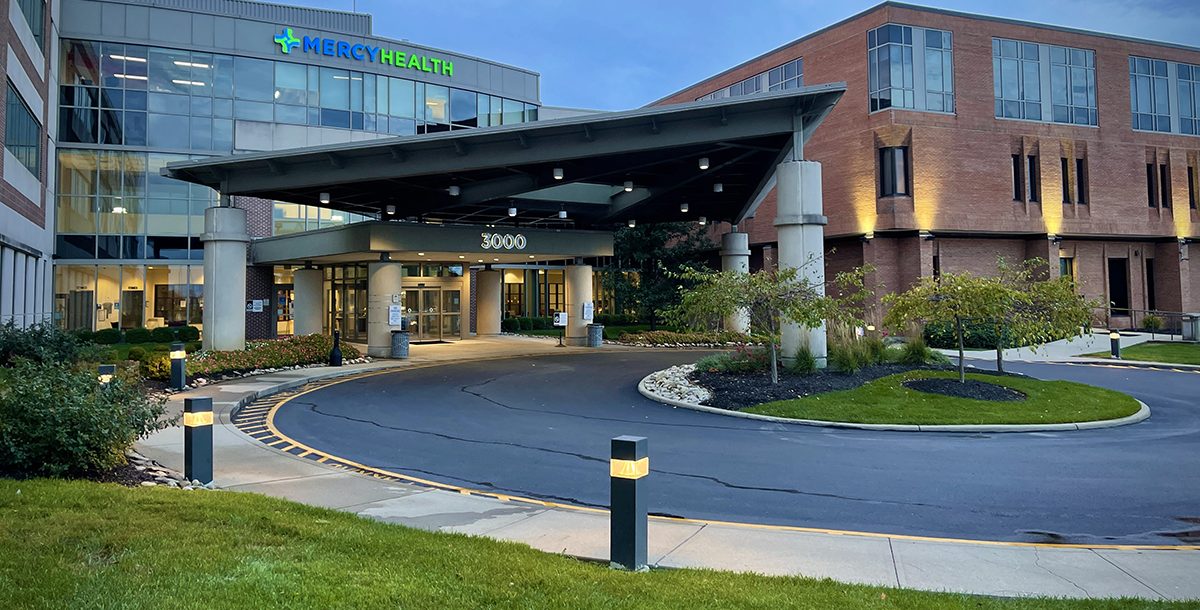 For three leaders at Mercy Health — Clermont Hospital, joining forces to establish new safety protocols not only benefited local patients but also our dedicated team members who care for them.

These leaders — Megan Birt, director of behavioral health services, Heather Mills, manager of nursing in the emergency department and Nichole Hall, manager of quality and operations for behavioral health — recognized the need to stabilize agitated patients who may become a danger to themselves or the medical staff caring from them. Building on a program that our ministry has operated in another part of Ohio, this trio recently launched a new process called CODE SOS, which stands for Show of Support, in the emergency department of Clermont Hospital (pictured above).

When a patient becomes aggressive or agitated, they typically show subtle signs before the situation escalates. Now, the hospital’s SOS team has trained other team members to recognize these signs, which include pacing, body language and speaking volume. When a team member sees these signs, they issue a “CODE SOS” that alerts the response team to an escalating situation.

Previously, a team of as many as 20 would respond to potentially violent situations – often triggering an even more violent response from patients who felt threatened. Now, the SOS response team includes a behavioral health leader, security and the clinical administrator on duty. Our behavioral health team at Clermont Hospital excels at de-escalating potentially harmful situations, especially now that the SOS program has launched.

For example, one time a patient with a history of aggressive behavior was becoming increasingly agitated. As the patient’s volume rose and their words became more aggressive, the care team recognized that things could quickly get out of control and called for a CODE SOS. The SOS team worked with this patient, discussed with them their needs and concerns and managed to de-escalate the situation before the patient’s behavior could harm themselves or others.

“The primary focus has been Crisis Prevention Institute (CPI) training for all staff in high-risk areas in de-escalation techniques,” Nichole explains. “Educating staff on the elements of trauma-informed care has also played a role in better understanding the situations that may affect outcomes for both our patients and our co-workers. The overarching goal is to take care of team members and patients in the safest way possible, particularly when situations become volatile.”

Because Clermont Hospital has a behavioral health unit, it tends to see more patients in crisis. This situation was exacerbated by the COVID-19 pandemic, where many patients without internet access were unable to utilize virtual care options. As a result, patients did not see their mental health providers and may also have lost the chance to renew their prescriptions.

“Since CODE SOS has rolled out, we have finessed some of the program’s finer details,” Nicole shares. “Having a single behavioral health responder to a CODE SOS was determined to be less stimulating for the patient and less chaotic for the department receiving the response. Behavioral health now identifies a Code SOS responder each morning and evening. This is a team member on the adult behavioral health unit trained in CPI de-escalation skills. They respond throughout the hospital to any CODE SOS called during their shift.”

Thanks to the work of Megan, Heather and Nichole, the CODE SOS team has already made a lasting impact at Clermont Hospital.

Over the course of the pilot period, which has been running since mid-summer, every CODE SOS that has been initiated has been successful in de-escalating situations that could have become violent. The CODE SOS team has done this without having to lay hands on patients or physically or medically subdue them. Additionally, our emergency department team members report feeling safer since the program launched.

Learn more about the emergency care and behavioral health services we offer at Mercy Health.