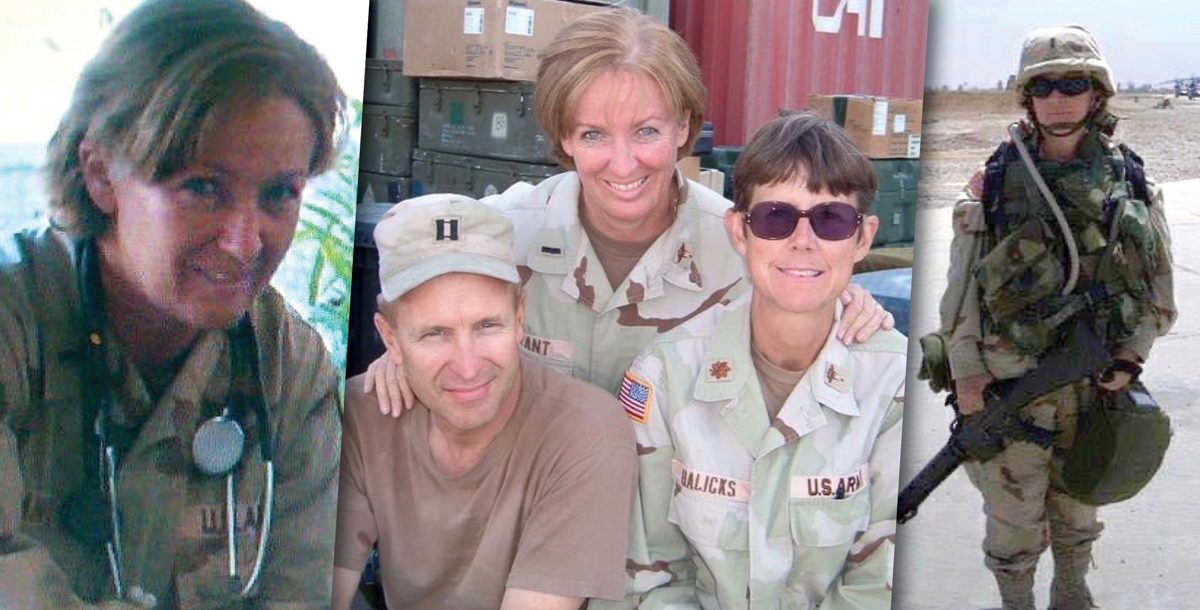 “I Choose to Serve Those in Greatest Need”: Deb Reflects on Her Time with the Military

Deb Bryant is our Toledo market’s chief nursing officer. She leads a team of dedicated nursing professionals across each of our seven hospitals in the area. These days, she wears business attire to work every day, but there was a time when Deb wore military boots and fatigues.

Recently retired from 20 years in the U.S. Army Reserves, Deb can share a story or two about her service, the things she saw while deployed and her life with a challenging career raising two – yes, two  sets of twins.

“I grew up all over the world because my dad was in the military,” Deb shares. “He was in the Air Force and was a plane mechanic. I was born in Germany at an Air Force base, and I have lived in Japan, England and all over the United States. I was one of four kids, and we were all born different places.”

Deb adds that when she was very young, she mentioned serving in the military to her dad and he replied, “no way.” However, she returned to her thoughts of the military after college with her career underway as unit manager in an emergency department. She accepted a direct commission and swore in right before 9/11.

“When 9/11 happened, I was still stateside,” Deb shares. “After 9/11, the Reserves started putting people in training school and by the end of 2003 deployed to Iraq. I was part of the surgical team of 20 people. We were sent to where soldiers were being injured, to stabilize them and get them to a higher level of care.”

Deb had to cross-train on all sorts of things because she was on such a small team.

“I learned to put up tents, drive a Humvee, back up a trailer, operate a generator and even change the oil in a Humvee,” she shares. “Our base was in what was called the Green Zone, an area of central Baghdad used by the authorities, subject to high security. We would see locals, soldiers, injured people picked up along the road.

In fact, one memory in particular stands out for Deb from that time.

“There was a big group that came in, more than 50 people, mostly Marines with injuries. I was outside and I had to use a marker as I worked through those injured to write on their chest or forehead what medication I had given them. One of the medics said to me, ‘Ma’am, where is your body armor?’ And I told him I had left it in my room. He said, ‘I have to go get it. They are shooting at you, and you don’t even know it.’ He went to my room and got it.”

After that, Deb left Iraq and was sent to Afghanistan. She was assigned to go the south and two of her good friends went to the north.

“I have a special memento from one of them that sits in my office to this day,” Deb tears up as she talks. “It says, ‘thank you for always listening to me.’ It is those things that stick with you.”

In Afghanistan, most of the injuries Deb and her team saw were from gunfire and IEDs, lots of amputations, belly wounds, head injuries and a lot of asthma because of the dust there.

“Our team would go on MED-CAP missions (Medical Civilian Assistance), to provide medical services in order to get information from the local communities,” Deb recalls. “We would go to small communities where they had never seen a woman without a burqa. We had some really good times, too. We played a lot of volleyball, played cards and I remember, mail time was a big deal.”

Deb came home in 2005, just in time to see her youngest set of twin boys turn 10 and her older boy/girl twins off at college to eventually become nurses themselves. Her husband had held down the fort nicely.

“Although, the kids joke he held them to just three sets of jeans and shirts each,” she says with a smile.

“I am glad to have had my military experience,” Deb adds. “You learn what makes people, people. You see so many backgrounds. In the military there is a huge population that is faith-based. They would pray before a mission, and we see that in our ministry. We put our patients first, we serve all. I choose to serve those in greatest need.”