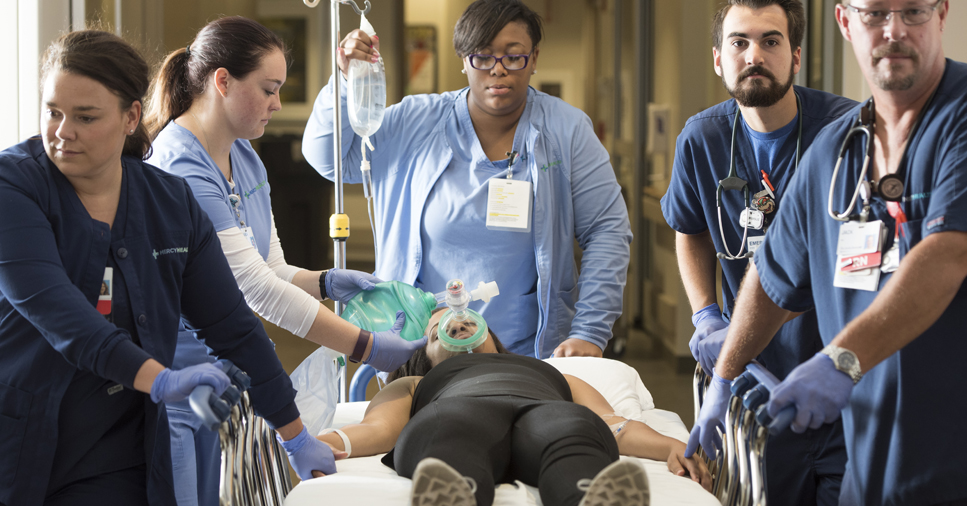 How a Strong Chain of Survival Saves Lives

When someone’s heart stops beating, every minute matters. Nine out of ten people who have a heart attack outside of a hospital will not survive. The series of steps that rescuers or bystanders perform to improve the likelihood of survival for heart attack victims is known as the chain of survival.

Mercy Health – West Hospital has worked to strengthen that chain through their emergency protocol. West Hospital has a program that allows area ambulance crews to call a line at the hospital and alert them of an incoming heart attack patient. Ambulance crews can even transmit the patient’s electrocardiogram, or EKG, to the hospital, so that the staff in the catheterization laboratory know what to expect and how to treat the patient when they arrive.

Two stories from Cheviot Fire EMS and Mercy Health – West Hospital demonstrate the chain of survival and why bystander CPR, EMS response and access to excellent cardiac care are so important to beating the odds and saving a life.

Two Heart Attack Victims Saved by the Chain of Survival

Tim Roedersheimer, 64, was shoveling snow when he began to experience chest pain. Soon after, his employees called an ambulance. When EMS arrived, they took Tim to the closest hospital, Mercy Health – West Hospital. The receiving team took Tim to the cardiac cath lab once they arrived at West Hospital. He had a complete blockage of his Aorta and was resuscitated a total of 15 times. Now Tim is doing well in rehab through Mercy Health and he performed excellently on his most recent stress test.

Melissa Leath, 43, collapsed in her shower on day. Her sister heard the fall and came to see what was wrong. She called 911 and began performing CPR staying on the line with the emergency dispatcher. Cheviot Fire EMS transported Melissa to Mercy Health – West Hospital where she was treated for a total blockage of her left anterior descending artery or LAD artery. Melissa is a cardiac technician and while she remembers little from that night, she recalls waking up in the hospital. She overheard the staff discussing her condition, shocked to learn that they were talking about her. She is now back on her feet and has met the men and women who saved her life that day.

Melissa and Tim attended an event at the Cheviot city council meeting where they met those who saved their lives, thanked them, and brought closure to their harrowing experiences.