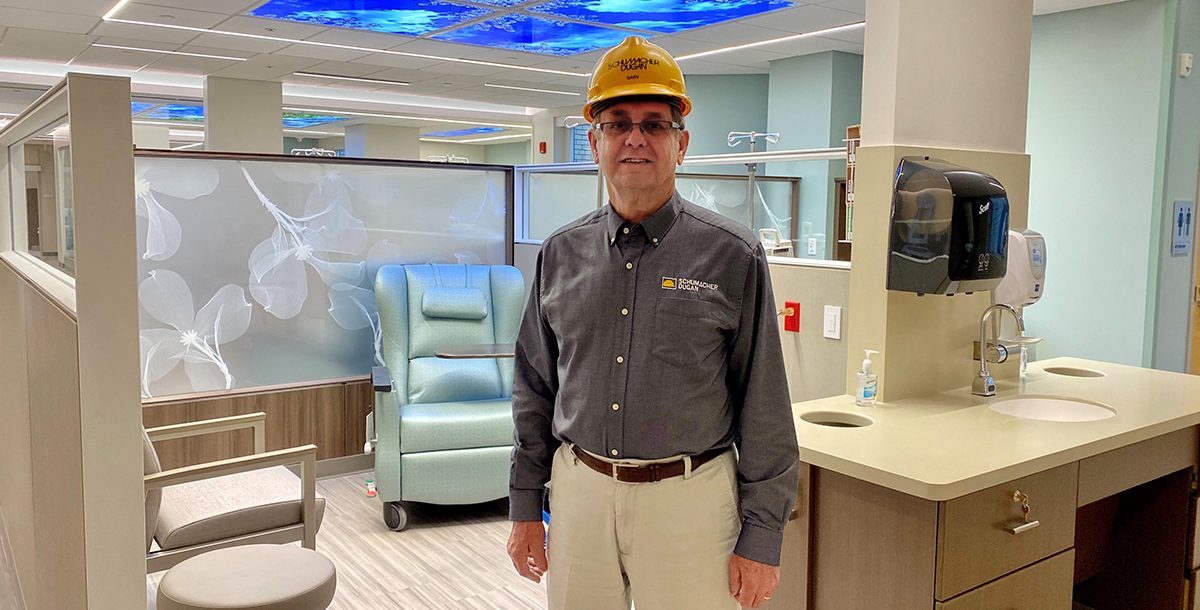 Job Brings Gary Back to Where He Received Blood Cancer Treatment

Sometimes life comes full circle. Take the case of Gary Wolf, a safety manager with Schumacher Dugan Construction. Gary recently completed work on a new 15,400-square-foot outpatient infusion suite that expands the services available to patients at The Jewish Hospital – Mercy Health Cincinnati Cancer and Cellular Therapy Center. His role was to ensure that the construction team followed all the requirements that help to keep them from injury.

“We make sure everyone is doing what they are supposed to do,” Gary explains. “We want them to go home to their family at end of the day and come back to work the next day.”

And back in 2019, following a diagnosis of multiple myeloma, the care team at the Mercy Health Cincinnati Cancer and Cellular Therapy Center helped make sure Gary could go home to his family and return to work. He remembers this medical journey vividly.

“On Oct. 3, 2019, I woke up and my back hurt,” Gary recalls. “I thought I was coming down with the flu. I called in sick and stayed home. The next morning, I got up and felt the same way. I got in the bathtub and lay in hot water. I couldn’t get out of the bathtub. I told my wife, ‘I’m coming out of this tub,’ and rolled out of it. Then she said, ‘we have to go to the doctor.’”

Gary saw a nurse practitioner the next day who drew his blood. She called him back the following day and shared that Gary’s doctor was in the office and had asked Gary to come in.

“During the visit, my doctor said, ‘I want you to go to Mercy West and get admitted. I don’t know what it is but we’re going to find out,’” Gary says.

“When they did the bone biopsy, that’s where the multiple myeloma showed up,” Gary adds.

Multiple myeloma is a type of blood cancer that forms in a white blood cell called a plasma cell that is found in bone marrow. White blood cells typically help us fight infections, but if they are cancerous, they multiply and overtake healthy blood cells. They produce proteins that can damage bones, organs, the immune system and red blood cells. Symptoms vary, but can include back pain.

“I got together with Dr. Essell in November of 2019, and he thought my multiple myeloma was almost dormant,” Gary shares. “However, after the first of the year, my numbers started to go up and he told me that he was going to have to do a stem cell transfer.”

On July 14, 2020, Gary was admitted to the Mercy Health Cincinnati Cancer and Cellular Therapy Center. He underwent chemotherapy for two days before healthy stem cells the care team had previously harvested from him were reintroduced into his bloodstream. Gary was discharged on July 31 and entered 45 days of home quarantine to minimize any potential exposure he might otherwise have had to COVID-19.

“I’m now in remission,” Gary proudly shares. “Dr. Essell tells me I’m doing great. I ask him to tell me where I’m at on a scale of one to 10, and it’s always nine. Physically, I feel fine. I consider myself in good shape. I exercise every morning. Other than being in the hospital and being quarantined at home, I don’t see any change.”

He was even able to go back to work part-time in November of 2020. And it was that work which brought him back to The Jewish Hospital and its new infusion center.

“It’s interesting to be back,” Gary notes. “I know my way around. The area we are renovating will be used for CAR-T cell therapy and Dr. Essell is part of that.”