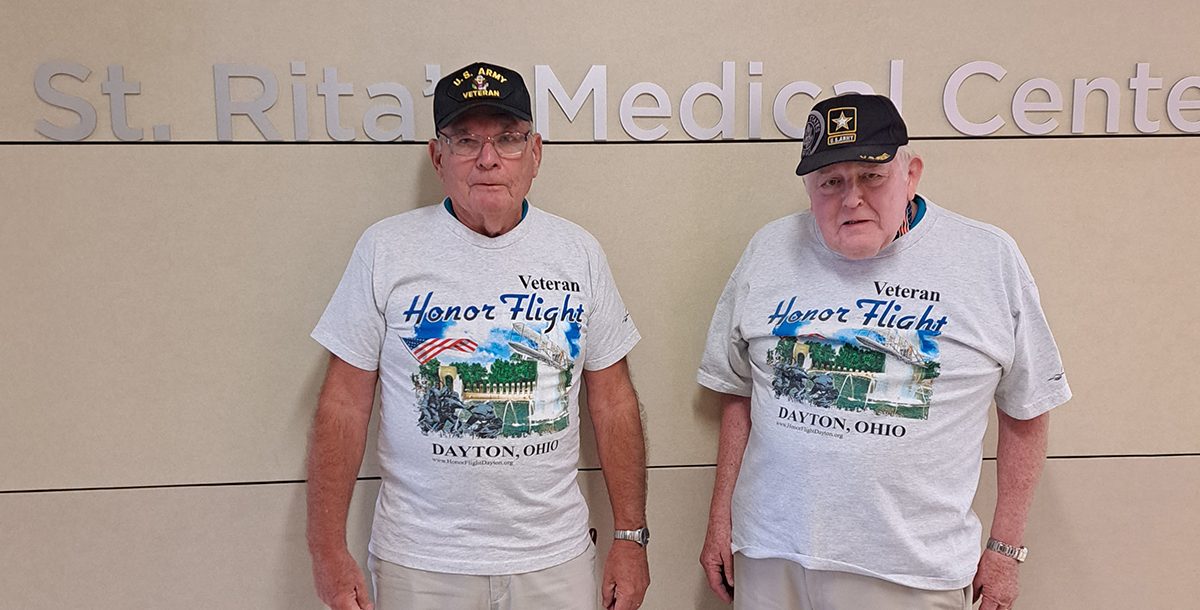 Volunteers Dick and Jim Give Back to Fellow Veterans

Dick Torlina and Jim Stewart have known each other quite a while. The pair volunteers at Mercy Health – St. Rita’s Medical Center and have been friends since 1978. They share a common bond in their military service, passion for the Lima community and support of veterans.

Dick, also a veteran of the U.S. Army from 1967 to 1969, served in an ordnance unit in South Korea in 1968. He has volunteered at St. Rita’s Medical Center for more than seven years, beginning as a greeter and more recently as a charter member of the veteran’s visitation program, a group of volunteers who visit with patients who are veterans.

“We ask our patients if they would like a veteran visitation, and there are five volunteers who visit veterans specifically,” Dick explains. “I have the Thursday shift and I average 10 veterans each Thursday.”

In a typical week, the veteran program may see 30 to 50 veterans.

“You meet all kinds of people,” Dick adds. “Most of the veterans served in World War II, Korea or Vietnam-era, and we have seen some Iraq and Afghanistan vets.”

Jim explains that after Dick got him interested in volunteering, he filled out an application and is glad he did it. His favorite part is working with the veterans and as a substitute greeter.

“Some like to talk, some do not,” Jim says. “But if they start talking, you might as well pull up a chair. They can tell some good stories.”

Dick and Jim had a common interest in Honor Flight, an organization that celebrates America’s veterans by inviting them to share in a day of honor at our nation’s memorials. This past summer on Aug. 27 was the first Dayton-area trip in three years due to the COVID-19 pandemic.

Dayton, Ohio originated the Honor Flight program in 2005, which now operates in 48 states and with multiples cities in some states.

Dick and Jim’s flight included 105 veterans and 90 “guardians” or helpers, the majority from the northwest part of the state.

“It was quite a long da. We started in Troy at a nearby hotel and got to the airport at 3 a.m.,” Jim recalls. “Once we arrived in Washington D.C. we got on buses at the airport, and over the course of 20 hours we visited seven stops, including Arlington National Cemetery and changing of the guard, the Air Force memorial, the Vietnam Memorial, the Korean War Memorial and the World War II Memorial. That meant loading and unloading, with half of the members requiring wheelchairs, but we were able to stay on schedule. It was nonstop activity – I thought basic training was easier!”

Dick and Jim both agree, the Honor Flight team is an impeccable organization.

“They took care of everything – lunch, planning, etc. It made it very enjoyable,” Dick adds. “The trip was emotional. There were tears, and for some it was the first time to see the memorials. We spent quite a bit of time at the Vietnam wall. One of the guys saw the name of a friend on the wall, it just brought it all home.”

On the flight back to Dayton, each veteran received a mail packet with letters from family members that Honor Flight contacted in advance of the trip. The packages even included mail from school children.

“It really meant a lot to them to get all that mail,” Jim says.

Once the group arrived in Dayton, late that same evening there was a celebration in the airport.

“Families were there, welcoming them back,” Dick says. “People lined the aisles in the airport and gave them gifts. There were military groups and bands. It was upwards of 2,000 people. It is something you will never forget. This is in my top five experiences of all time.”