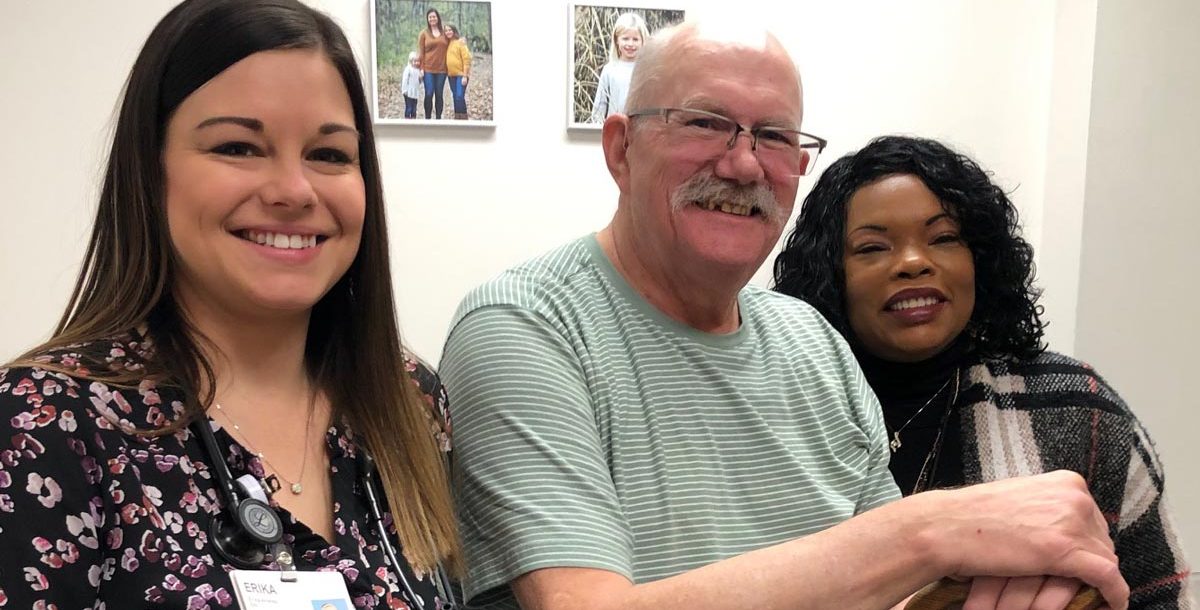 Michael Braun knew something wasn’t right. When he sat at his desk, the 67-year old tank room technician from Greendale, IN, felt fine. However, walking just a few feet was a different story.

“I felt short of breath and there was a tightness and sore feeling in my chest,” he recalls. “I thought it might be bronchitis. It was the Monday before Thanksgiving and my buddy asked for help putting rail cars away. I got up, walked 40 to 50 feet and was so short of breath. I got concerned. I’ve never had that before.”

Since he was between doctors at the time, Michael called Mercy Health Physicians for an appointment. He was initially told to schedule a new patient visit a couple of weeks out. That is when he described his symptoms to scheduler Gwen Nicholson.

After a nurse triage team determined that his symptoms sounded respiratory in nature and didn’t warrant an immediate visit to the emergency room, Gwen got him a same day appointment. Micheal met with certified nurse practitioner Erika Andres of Mercy Health – Kenwood Internal Medicine. She ran a few tests before sending him home.

“He was feeling fatigued,” she says. “He looked okay but was short of breath when walking. I thought that maybe he had an upper respiratory infection, but his chest X-ray came back fine. I also ordered blood work and the results showed that Michael was at high risk for a blood clot.”

Erika called Michael at home and talked with his son. She told him Michael needed to get to an emergency room right away.

“It blew my mind,” says Michael. At his local emergency room, he reported Erica’s findings.

“They did a CT scan and found I had multiple blood clots in both lungs. An echo on my legs found a blood clot there, too. Thankfully, my heart was clear and there was no damage.”

After a course of blood thinners, Michael was released on Thanksgiving and has remained under the care of a pulmonary specialist and a hematologist. Thanksgiving was particularly memorable as was Christmas Eve, which his family celebrates in their own special way.

“My family meets Christmas eve night and we barbecue and have homemade sloppy joes. It tasted like manna from heaven. I didn’t think I’d be here to taste that, and I must thank Erika and Gwen for that. Those two ladies saved my life.”

Gwen is amazed to hear how her work impacted him.

Looking to schedule your own appointment with a Mercy Health provider? Learn more about our video visit options.