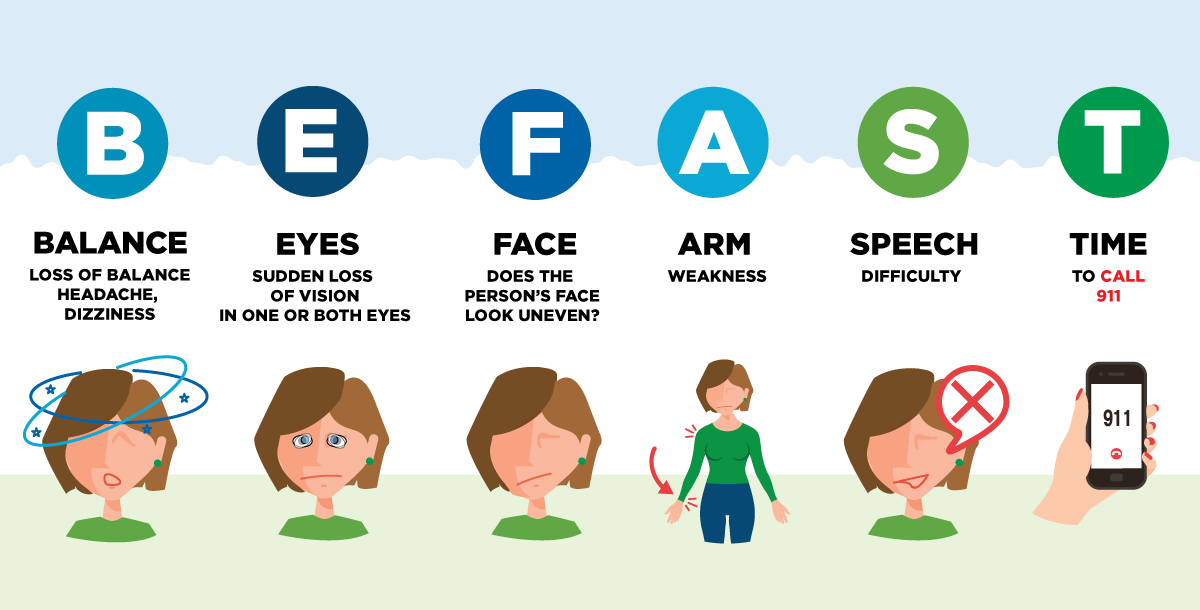 Mary’s Story: The Warning Signs of a Stroke

A stroke is a life-threatening ordeal capable of changing someone’s life in an instance.

According to the CDC, stroke is the fifth leading cause of death in the country and is also a major cause of serious disability for adults. About 795,000 people have a stroke each year, and about 610,000 of these are first-time strokes.

Stroke symptoms can appear quickly. Thus, it is important to be prepared.

When evaluating symptoms and looking for warning signs, remember to BE FAST:

B – Balance, loss of balance as well as headache and dizziness

E – Eyes, a sudden loss of vision in one or both eyes

A – Arm, a feeling of weakness in them

It is also important to note some stroke symptoms might not be straight forward. Take Mary Ashbaucher for example. The 55-year-old nurse initially thought her symptoms, vision trouble and dizziness, were the result of a recent fall in which she hit her head.

“Nothing stood out. My cholesterol isn’t that high and I’m not a diabetic,” Mary says. “So on paper, looking at my lab results, they wouldn’t have shown a risk for stroke.”

Waking up early one morning, Mary noticed a dramatic change in her appearance and was having trouble swallowing. Her husband quickly rushed her to St. Anne Hospital, both of them still not aware Mary was having a stroke.

Quick action from Dr. Chan Seng Tan and Dr. Eugene Lin ended up saving Mary’s life. They found a clot in her basilar artery on the right brain stem. After having an emergency thrombectomy to remove the clot, Mary quickly felt the effects.

“Once the clot was gone, it was like a tree with all the branches growing back. And I could swallow again,” she says.

Without this procedure and fast action, doctors say the stroke could have left Mary quadriplegic or dead.

“I can honestly say I’m alive today because of the work of Dr. Tan and Dr. Lin,” says Mary.

Within a few days, Mary was back home with family and her road to recovery began. A temporary scare briefly landed her back in the hospital. She has also noticed some changes in her speech, memory and ability to multi-task. Mary is now taking things slow as she waits to officially begin her therapy.

“The nurse in me wants to just keep going,” she says. “But I’ve decided that if I’m going to be around, I’ve got to step back, take care of myself, and focus on me.”

Mary hopes her story can inspire others to advocate for their health and not ignore warning signs.

“People need to know that strokes don’t just happen to the elderly,” she says. “There are other symptoms that present themselves when having a stroke. I don’t want anybody to lose their life at 55 because of a stroke.”