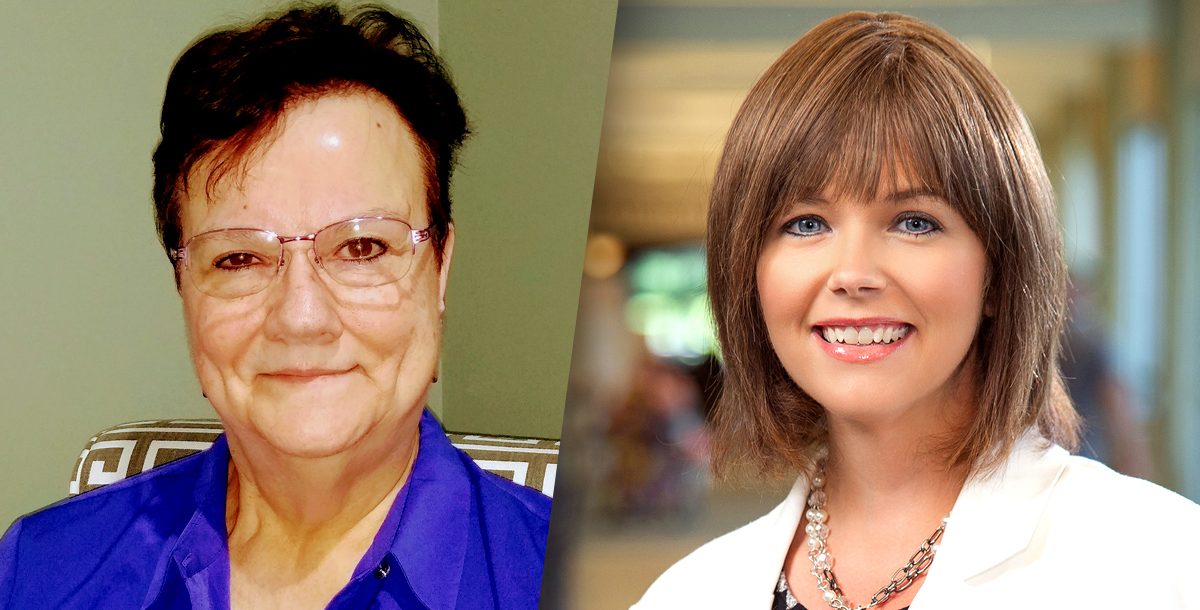 As Dianna Smith will tell you, she survived breast cancer, a mastectomy and subsequent chemotherapy with no long-lasting effects. Looking at herself, however, there was always a reminder of what she’d gone through.

“When you look in the mirror, you want to look like a woman. You want your parts to be there, and they weren’t. They were gone,” says Dianna (pictured above, left).

Following her mastectomy in 2018, Dianna, 62, who lives in Mayfield, KY, travelled nearly 150 miles to Nashville, TN in 2019 to complete her breast reconstruction. There, a trained nurse tattooed areolas and nipples on her breasts. The tattoos faded quickly, however. Once again, Dianna felt the lack of a natural look.

“When you look and see two lumps…,” she says, trailing off. “I’m older, I know that. But I still want to look like a woman.”

“Cancer has the ability to take so much from a patient,” Celia says. “When a woman has breast cancer and her life is threatened, her only choice may be to have her breast removed.”

She continues, “breasts are part of what make a woman feel like a woman. They are part of their womanhood and their identity. You give women the best possible reconstruction you can but it’s not the same. Giving them a nipple tattoo changes the appearance of the reconstruction into something more like what they had.”

Celia wanted to learn to do three-dimensional areola and nipple tattooing. This way, she could offer complete breast reconstruction services locally, along with Daniel Howard, MD, one of our physicians.

“Some women don’t have resources to go back and forth to Nashville, or their insurance doesn’t work out of state,” says Celia.

And while local tattoo artists can do the work, insurance won’t cover the cost. This leaves patients to pay out of pocket.

The Mercy Health Foundation – Paducah stepped in and funded Celia’s training with New Jersey’s the Beau Institute. She completed the course in March and had a list of patients ready to get their tattoos – or restore faded tattoos — when she launched the service on April 9 of this year.

“I was the number one patient,” says Dianna, noting how closely Celia worked with her to achieve the look Dianna wanted.

“Celia has stencils. You can look and see what size you want. After you choose, she will draw the nipple and areola on you. If you don’t like it, she’ll wipe it off and start again,” Diana shares. “You get to pick your colors. We went through different colors and found a match to what I felt I needed. She wrote everything down so if I need a touch up, she’ll know what I need.”

The procedure takes about an hour and most of the time is spent getting the color right. Celia uses topical anesthesia gel to numb the breasts once she starts tattooing.

“It’s not painful,” says Dianna. “Anyone who’s had a tattoo will know what it feels like.”

Celia uses shading to make tattooed nipples look three dimensional on those patients who don’t have a skin flap made to look like a nipple. During her course, she also trained on using pigment to minimize any scars in the breast area or scars from chemotherapy ports.

Dianna is very pleased with her own results.

“When I had the mastectomy, it was so ugly. I was wondering how they would fix this to look like a breast, but they did,” says Dianna. “Now with the tattoos, I sometimes wonder if it even happened. It makes me feel better that if anyone would see me undressed, I look like I have breasts and they won’t ask what’s wrong with me.”

And this feedback is just what Celia wants to hear.

“Giving these ladies great tattoos is the final piece of the puzzle to offering our patients complete breast reconstruction,” says Celia.  “I’m proud to offer this to our community and I’m grateful to our foundation, which saw the value of this training and so graciously funded this for us.”

“I would encourage anyone going through breast cancer and mastectomy to definitely have reconstruction,” says Dianna. “Tattooing is one of the last steps of your reconstruction. Definitely do that. It will make you feel better. It’s made me feel better.”

Learn about the breast cancer care services we offer at Mercy Health.