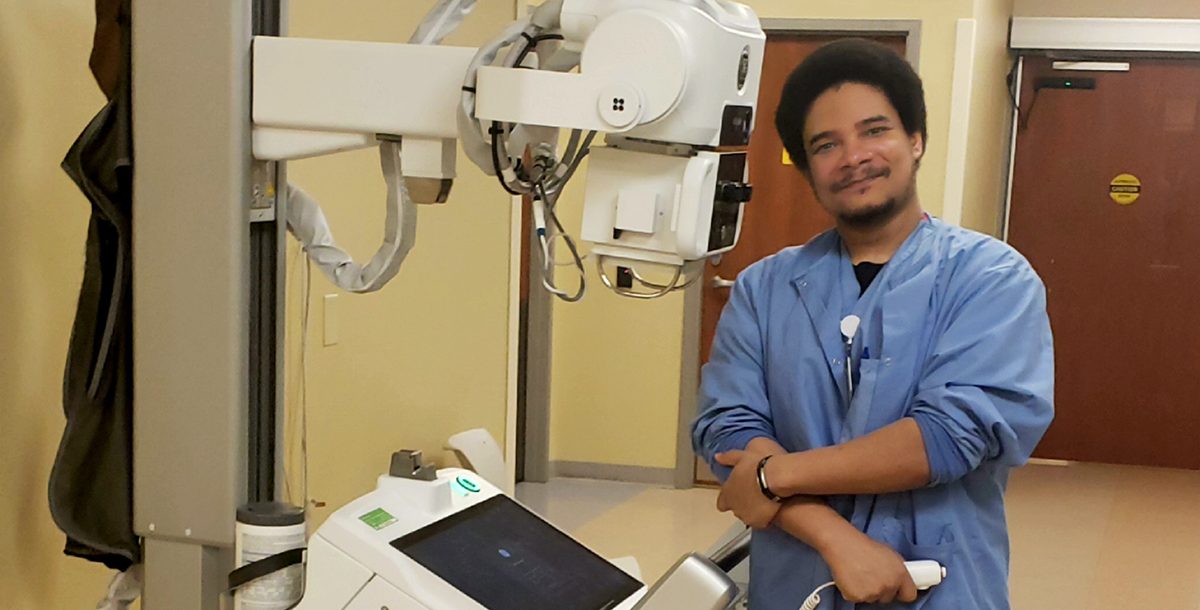 Our radiology department team in Springfield, Ohio is celebrating one of their own hometown heroes. Toreo Carterrecentlygraduated from his medical imaging program, passed his registry examination with the American Registry of Radiologic Technologists and accepted a third-shift position at Mercy Health – Springfield Regional Medical Center as a fully licensed radiologic technologist.

But Toreo’s story is much more than his success today. His story is really one of determination and grit.

“I grew up in Springfield and attended a local high school. Then, a dental assistant school,” Toreo shares. “We actually had a class on small X-ray machines.”

A career in dentistry wasn’t Toreo’s calling, but the dental assistant school experience helped him realize he enjoyed working with people. One of his relatives who works with our health system in environmental services referred him for a job opening.

“Toreo started with our ministry in 2015 as part of the environmental services team,” Kevin Swisher, one of our supervisors in imaging, shares. “He would come in at night and provide general cleaning support for our area. I was picking up a lot of third shifts in my role as a supervisor and that is how I got to know him.”

Toreo remembers Kevin, too, as an X-ray tech. He had no idea at the time that Kevin would one day be his supervisor.

Over the years, occasional meetups between Toreo and Kevin often included discussions about radiology and of the educational requirements for a medical imaging career.

“He was interested and had taken some general education classes at the local community college,” Kevin recalls. “Then, he started to ask about programs and waitlists. He started in a radiology technology program.”

Toreo pursued his education in radiology technology, all while continuing full-time job with us providing excellent environmental services work. In fact, this work kept him excited about his upcoming career.

“I really loved seeing all of the body anatomy on the imaging screen,” Toreo explains. “I love how everyone is equal under the skin – all nationalities and races are the same no matter who we are.”

While Toreo was completing his program, he would talk to Kevin every couple of weeks to update him on his progress.

“We would catch up on his studies and it was nice to follow along and relive my own student experiences,” Kevin shares.

As part of his program, Toreo was assigned to Springfield Regional Medical Center for his second year of clinical rotations.

“I love the professionalism of the team at Mercy Health,” Toreo says.

Kevin adds, “Toreo was here three days a week. He spent a month as an X-ray technician and three months as a student technologist in our department.”

Through his studies and time with the team, Toreo mastered the critical skills for the role. He was also a great fit with the team. The timing worked out when a full-time position within the department became available.

“I was cheering for him – he is a homegrown guy, it all made too much sense to not bring the opportunity to him,” Kevin says.

“We are so proud of Toreo,” Jodi Kincaid, imaging manager, adds. “He is definitely one team member we are proud that we grew our own. This victory is even sweeter because he worked so hard.”

For now, Toreo is focused on improving his skills and overall performance in his new role.

“Our patients are very thankful for our service,” Toreo says. “They are kind and humble, they even shake my hand. I feel like I did something great every day and it makes me thankful to be here.”

Learn about the radiology and medical imaging services we offer at Mercy Health.