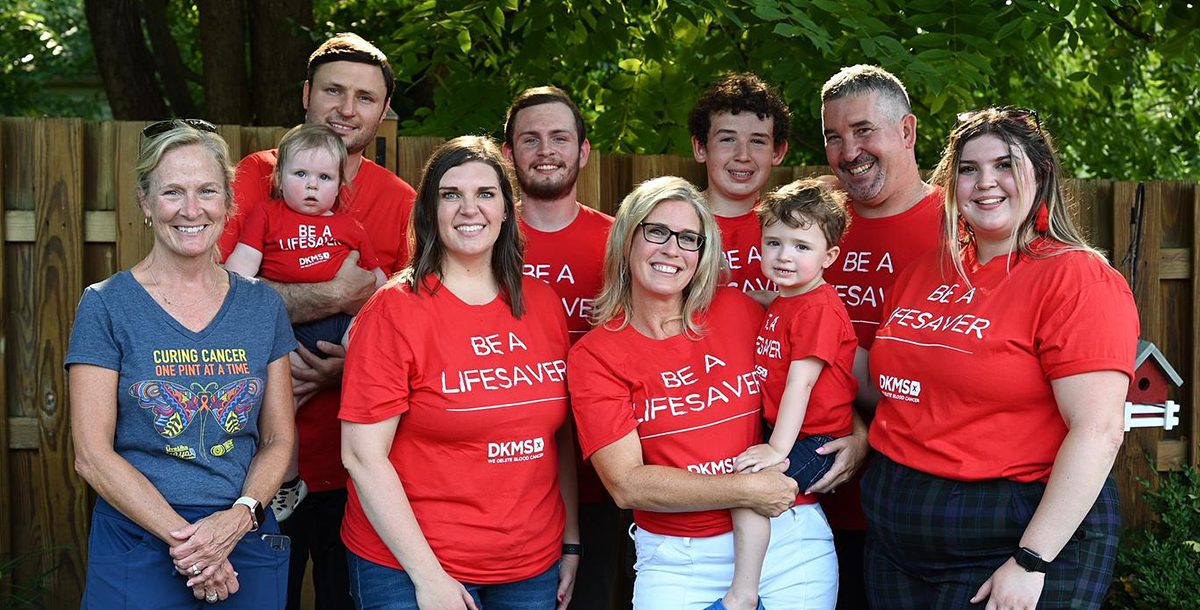 Kaelynn Speed, a freshman nursing student in college, was hurrying between classes when she made a spur-of-the-moment decision that would ultimately change a family’s life.

“I was walking through the student union at Wright State University during a 10-minute gap between classes,” Kaelynn, now 21, recalls. “I stopped at an organization’s booth and they asked me if I had time for a cheek swab. It didn’t take long, and I made it to class on time. I didn’t know what I was signing up for and forgot all about it.”

Then, a few years later, Kaelynn would remember that moment.

“Fast forward and it’s first semester finals week of my junior year,” she continues. “I called my mom stressed out and she asked me, ‘What did you sign up for?”

The booth she’d visited belonged to DKMS, an international nonprofit organization dedicated to the fight against blood cancer and blood disorders.

“My mom said, ‘you matched with someone’ and I was dumbfounded,” Kaelynn shares.

Kaelynn was a perfect match for Mads Pomranky, a baby from Chicago whose family received a frightening diagnosis in November of 2019.

“Mads was 5 months old when I brought him to our pediatrician with a runny nose and goopy eyes,” Jenn Pomranky, Mads’ mom, shares. “He didn’t seem well, and she did a thorough exam, during which she noticed that the left side of his stomach was a little swollen. She ordered an ultrasound and it showed that his spleen was enlarged. That prompted her to order blood work. The results were really abnormal. His white cell count was through the roof and red cell count was really low. She called us into the ER, and you could tell she’d been crying. She told us it could be three things, including leukemia.”

An ambulance rushed Jenn and Mads to the University of Chicago Comer Children’s Hospital where, following a bone marrow biopsy, doctors confirmed that Mads had juvenile myelomonocytic leukemia (JMML).

“They told us he would need a transplant,” Jenn says. “That was only way to cure this type of leukemia.”

When Kaelynn first found out she was a donor match, she didn’t yet know anything about Mads or his story. Although she was worried about a potential time commitment due to her studies, Kaelynn and her family knew she had to follow through with a donation.

“The timing actually ended up working out perfectly,” Kaelynn shares. “Originally, I was approved for marrow extraction from my iliac crest, but this was at the height of COVID-19. We got a phone call that there was a stop to nearly all hospital procedures. So, we had to switch to peripheral blood stem cell donation instead.”

Peripheral blood stem cell donation is a nonsurgical procedure to collect blood-forming cells for bone marrow transplants. Diane Shapiro, a nurse transplant coordinator with The Mercy Health Cincinnati Cellular Cancer Therapy Center at The Jewish Hospital, visited Kaelynn at home to administer the shots she needed over the course of several days (pictured in copy) to increase the number of blood-forming cells, also known as blood stem cells, in Kaelynn’s bloodstream so she’d have enough for herself as well as for Mads.

When Kaelynn was ready, Diane collected her blood stem cells in a procedure called apheresis.

“I had one IV in each arm. One collected my blood and sent it to a machine that collected my stem cells. The other returned the remaining blood to me,” Kaelynn shares.

Meanwhile, in Chicago, Mads’ care team celebrated finding a 10 out of 10 match for the little boy and work got underway to prepare him for transplant.

“Mads had four rounds of chemo to get his leukemia cell count down to help him. The care team froze Kaelynn’s cells for two weeks to be sure she didn’t have COVID-19 and then Mads was admitted to Comer’s Children’s Hospital,” Jenn says. “There, he did one more chemo that brought all of his numbers down and then they hung up her stem cells. It was an hourlong process. A nurse monitored Mads and the chaplain said a blessing over her stem cells. Just watching this person’s stem cells going into our child, it was very emotional. All we could do was thank God for this donor.”

The date was June 17, 2020. Mads was 13 months and one day old. He was closely monitored following the transplant and in time, tests confirmed that the transplant worked. Kaelynn’s cells engrafted in Mads’ body.

“He’s now a thriving, crazy 3-year-old who doesn’t stop,” Jenn shares. “You’d never be able to tell by looking at him that he had leukemia. He’s doing well.”

After the passage of one year, donors and their recipients have the opportunity to get in contact with each other. Jenn didn’t hesitate to find Kaelynn.

“When I got Kaelynn’s information on the one-year anniversary of Mads’ transplant date, I looked her up on Facebook,” Jenn recalls. “I thought, ‘I have to know who she is.’”

Although COVID-19 restricted an in-person meeting, the families arranged to meet virtually.

“She’s a young girl but seeing her and talking to her, you could just tell she was this amazing person,” Jenn shares. “She’s so selfless. I don’t think she will ever understand how much she means to us and our family. Just meeting her and her family, these people are amazing. We’re so happy that she did this, that by chance she walked up to a booth at college and signed up.”

Kaelynn was just as moved by their virtual meeting.

“I just sat there and looked at him. They are the most beautiful family you’ll meet in your life. I was almost speechless, which is rare. I thought, ‘I’m part of you forever. We have same DNA, buddy.’ It was heartwarming to see him in front of me. Jenn is amazing. I got one really long note from her. I’ll never forget it. It said, ‘thank you for letting my baby walk and learn.’ I didn’t really do much.”

Jenn also sent Kaelynn a book of Mads’ story, detailing everything he went through, including remission (pictured in copy). Kaelynn now keeps Mads’ book and card from her 21st birthday on her desk so she can see it every day.

The families worked to plan an in-person visit as soon as Mads’ care team cleared him for it. That visit took place in Cincinnati, Ohio on July 22, 2022 (pictured above). Kaelynn most looked forward to holding Mads, playing with him and learning who he is. She notes that she experienced overwhelming joy at their meeting.

“As soon as I grabbed Kaelynn, I couldn’t stop crying,” Jenn shares. “What she did is so amazing, and we just love her so much. It’s just so exciting to actually be able to give her a huge hug and just say thank you in person.”

Today, Kaelynn is considering working in pediatric oncology. And she shares that she wouldn’t hesitate to donate again.

“I wish I’d known earlier how easy it is to donate and how life-altering it is,” she adds. “I want to get the word out. Genuinely, it’s the littlest work for the most reward. The look on the recipient’s face is worth a million donations. I would do it over and over again if I could.”

Both Kaelynn and the Pomranky family are strong advocates for DKMS and encourage people to join the registry.

Also, learn about the blood cancer care services we offer at Mercy Health.