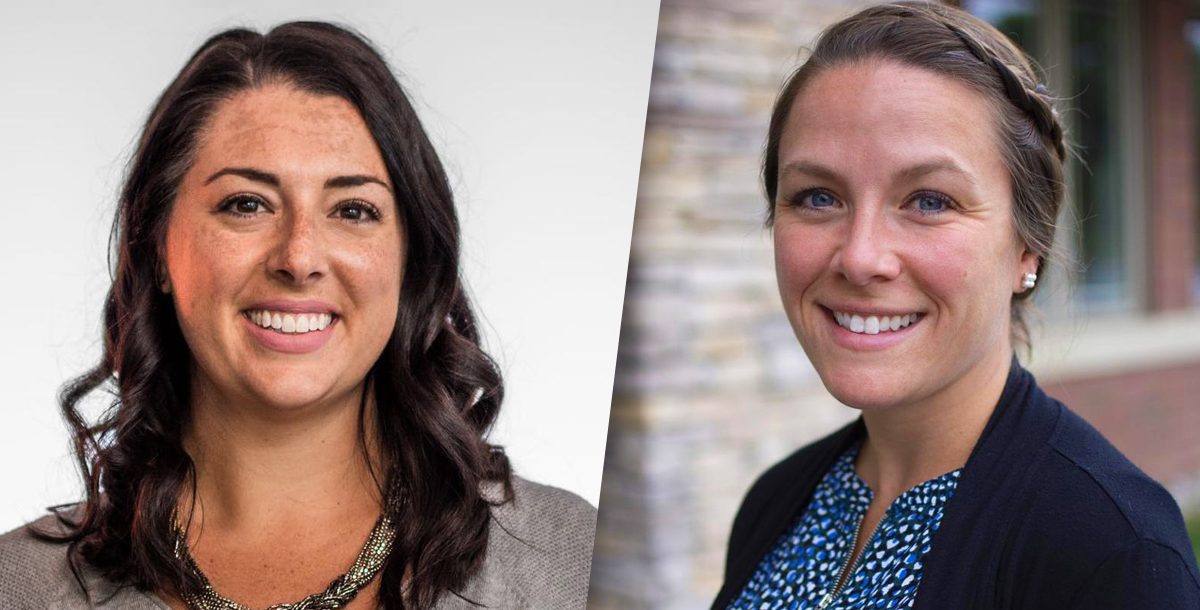 Pelvic Floor Therapy Helps Sarah Before and After Childbirth

When Sarah Jones (pictured above, left) started feeling unusual discomfort during her second pregnancy, she didn’t hesitate to seek care from our pelvic therapy team.

“I was having a lot of pelvic pain with my second pregnancy starting at about six or seven months,” Sarah explains. “I had not had that feeling, pressure and pain with my first pregnancy. My mother and grandmother have had pelvic prolapse, so I thought there might be some genetic component to what I was feeling. I was wondering what I could do to get relief and if there were preventive measures I could take.”

Uterine prolapse describes a condition when stretched and weakened pelvic floor muscles as well as ligaments can no longer support the uterus. Without adequate support, the uterus can slip down into the vagina or even protrude from it. It most often affects women who’ve gone through menopause and had more than one pregnancy. Prolapse can cause the loss of bladder control, trouble having a bowel movement and the sensation of something falling from the vagina.

Sarah notes that her mother’s history of prolapse and the pain she experienced because of it played a great role in why she decided to seek pelvic therapy care. Both a friend and her gynecologist recommended she seek out Samantha “Sam” Koewler, (pictured above, right) a pelvic floor therapist at Mercy Health – Eastgate Medical Center.

At the time, Sarah was unsure what pelvic therapy could offer her since she was seven months pregnant. However, Sam provided her not only with an understanding of the stress her pelvic floor was under, but also effective exercises to help strengthen these muscles.

“When I first went in, she said to think of my uterus and pelvic floor as a hammock. Now, being pregnant, I had a heavy person in my hammock. She was right! I had almost a 10-pound baby,” Sarah says. “Sam gave me certain exercises that I could do while pregnant. I started working on them a few times a week and they really helped.”

Once Sarah received clearance from her OB/GYN to resume therapy after the birth of her baby, she started back up. However, while pregnant, Sarah also noticed that her abdominal muscles had separated to make room for her growing baby. This is normal during pregnancy. So, in addition to working on her pelvic floor, Sam gave her exercises to increase her core strength.

“I saw great improvement in my ab separation,” Sarah says. “They were separated to make room for the baby, but they came back. I was doing pelvic floor and core exercises to get stronger since the core helps support everything, including the pelvic floor.”

Sarah feels strongly that pelvic therapy should not only be available as preventive care for future mothers but should also be included in postpartum care.

“Nobody talks about this,” Sarah shares. “Had my family not had the same issues, I would not have known to ask for help. It just doesn’t come up and it should be preventive care.”

When asked what she would say to future mothers, Sarah replies, “anybody who is going to be pregnant or have a child, try to have this be part of your postpartum care. It needs to be standardized. Please consider it. I peed when I coughed or laughed and I’d say, ‘it’s because I had a baby.’ But you need to get that fixed now or later in life, you might have larger issues.”

Learn more about the pelvic floor therapy and rehabilitation services we offer at Mercy Health.