In 2018, then 16-year-old Lauren Thomas was excited to play a sport she loved with friends at a volleyball camp held at Youngstown State University. Little did she know, attending camp would be a life-changing as well as lifesaving event. 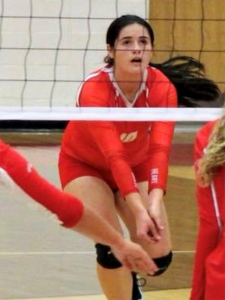 While on the court, Lauren stumbled, thinking at first, she simply sprained her ankle. However, by the time she got to the sidelines, her speech began to fail and the right side of her face began to droop. Paramedics were quickly called and fortunately, Lauren was just two blocks away from Mercy Health – St. Elizabeth Youngstown Hospital. This is a coincidence that her parents believe saved her life.

“We live 45 minutes from Youngstown,” Lauren’s mom, Marla, shares. “As someone who understands that every minute counts, it was providential to know she was within walking distance to the hospital.” 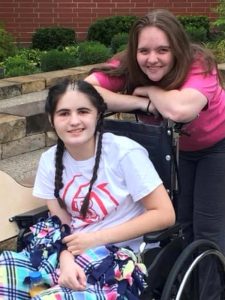 Upon arrival, Lauren was diagnosed with suffering an ischemic stroke. It was caused by a clot that blocked blood flow to her brain. Within 40 minutes, Lauren was given a tissue plasminogen activator (tPa) or a “clot buster” before receiving a thrombectomy. This innovative surgical procedure is used to remove blood clots from arteries and veins.

“There is no doubt that the level of care that she received so quickly is a key reason why Lauren is still here today,” Marla says.

Following her thrombectomy, Lauren was life-flighted from St. Elizabeth Youngstown Hospital to Akron Children’s Hospital, a pediatric affiliate of Mercy Health, where she spent 15 days in the intensive care unit (ICU). Over the next four months, Lauren had to relearn how to both walk and communicate. Eventually, in November of 2018, she was discharged home.

“Lauren’s twin brother suffers from cerebral palsy,” Marla shares. “For years, Lauren was his number one supporter. But now he has become her caretaker, her biggest fan, and her biggest motivator.”

Lauren graduated high school in 2020. Although the stroke has permanently affected some of her motor skills and abilities, Lauren plans on taking an English class this summer.

When asked about the care team at Mercy Health, Marla was quick in responding “I want to give them each a hug. I want to thank them because if it wasn’t for each of their skill and compassion, Lauren wouldn’t be here. I truly believe that.”

Learn more about the stroke care services we provide at Mercy Health.