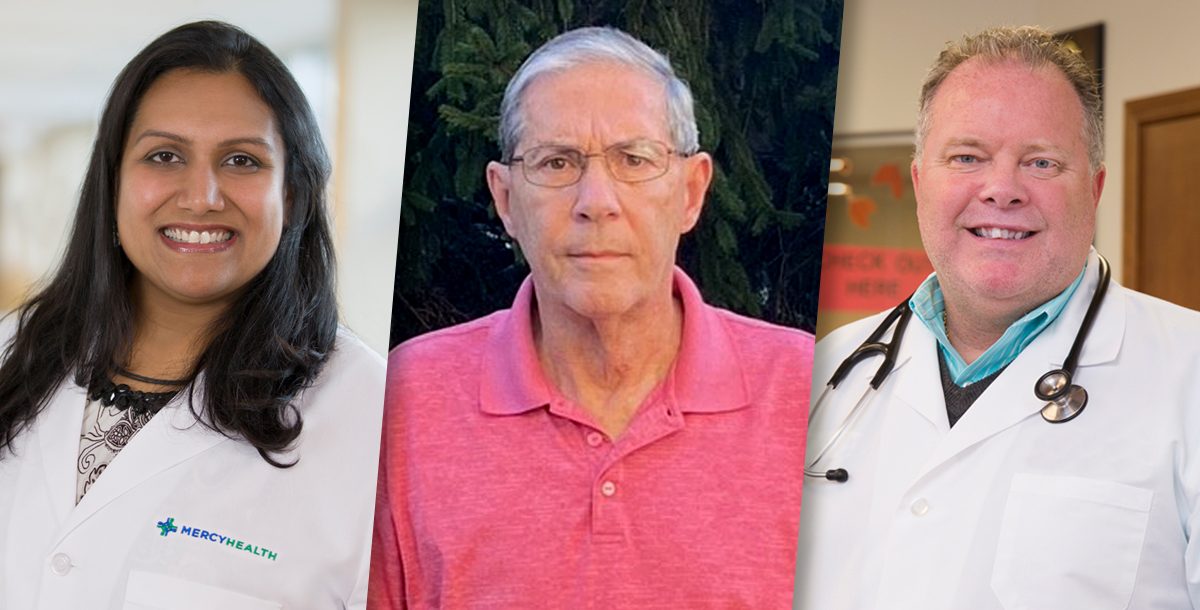 In early January of this year, after feeling an extreme itching sensation on his right breast, Richard Stencil made a shocking discovery – a noticeable lump.

After showing his wife, the pair decided he needed to be examined by a doctor. Luckily, Richard already had a routine check-up scheduled with his primary care provider, Richard White, MD, at Mercy Health – Oak Point Primary & Specialty Care.

“When Richard came to see me, I knew there was a concern given the firmness of the lump and location,” Dr. White says.

He immediately sent Richard to get a mammogram and biopsy. In just a few days, Dr. White confirmed Richard’s worst fear.

“At first, it was just hard to believe,” Richard recalls. “I was shocked I had breast cancer.”

Male breast cancer is rare. In fact, less than 1 percent of all breast cancer patients are men. Even though Richard was shocked to say the least, he knew Dr. White and our care team would help him find a solution.

“I have a lot of confidence in Dr. White. He has always been great to me, and I trust what he says. When he recommended that I visit Dr. Patel, I had no doubt she was going to provide excellent care.”

“Fabulous” and “professional” were the words Richard used to describe his experience with Mita Patel, MD, one of our breast surgical oncologists. She and her team performed surgery to remove the lump, a procedure that Richard says only kept him in the hospital one night and resulted in hardly any pain.

Richard was not only amazed at the ease of the operation but was also blown away by the care and comfort the team provided.

“Right before surgery they gave me a pillow to rest my head on,” Richard says. “One of the standards of breast cancer surgery was a pink pillow for the patient, but they even went the extra mile to make sure I had a special blue pillowcase. Small things like that went a long way.”

Thankfully, Richard didn’t require any radiation or chemotherapy following his surgery. Instead, he simply has to take medication and see his doctor for regular check-ups every six months.

Doctors say Richard’s outcome was improved because he didn’t delay reaching out to his primary care provider once he noticed a problem. Unfortunately, with male breast cancer, that’s not always the case.

“Men are not taught to screen for breast cancer. Some are even ashamed of admitting a breast mass and getting a mammogram,” Dr. Patel explains. “Studies suggest they have a higher mortality than women when diagnosed as a result. Earlier caught breast cancers are treatable and curable.”

Whether male or female, detection and prevention are key. It is very important to know the signs and symptoms, which can include a lump like the one Richard found or include other things like nipple swelling or discharge, an inverted nipple, sores on or around the nipple and swollen lymph nodes under the arm.

After going through breast cancer, Richard urges others to be vigilant and act as soon as possible.

“I would recommend anyone – men included – don’t be hesitant to, when you find something, follow up with it. I caught mine early enough in the beginning stages, and I have no doubt that contributed to my successful outcome.”

If you notice any irregularities around your breast, it is important to have it checked out immediately by your health care provider. Check out our tips for completing a breast self-exam.

Also, learn more about the mammogram services and breast cancer care we offer at Mercy Health.