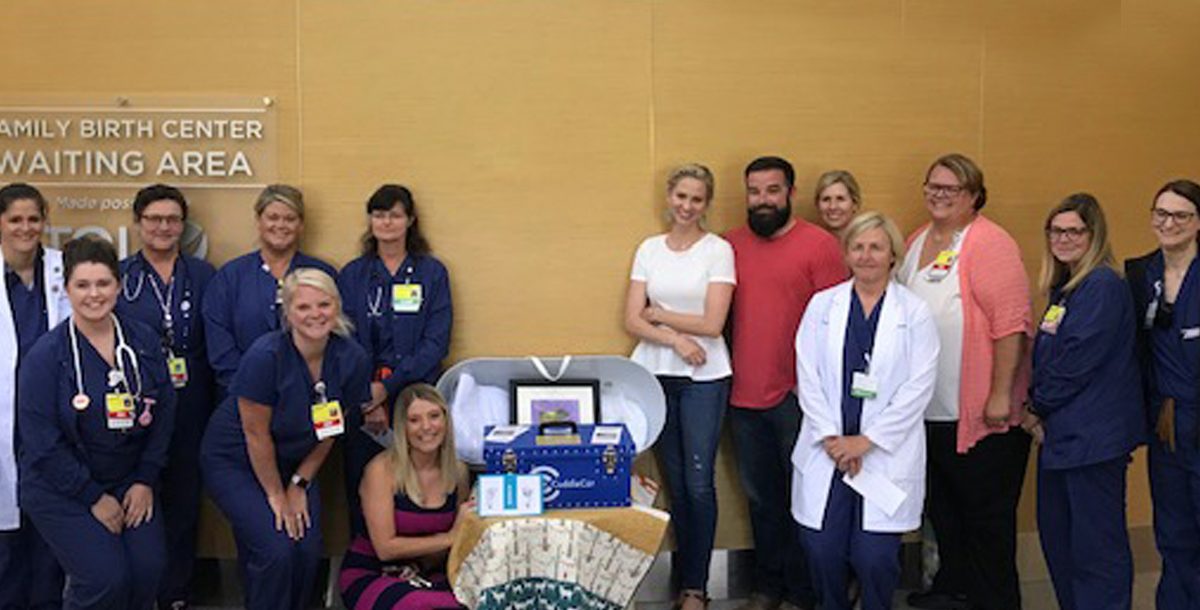 Learn how a donation is helping other grieving families.

On Friday, May 31, 2019, Lear and Megan McCoy experienced the stillborn birth of their baby boy at Mercy Health – Anderson Hospital Family Birthing Center. Now, their donation is an opportunity to help other grieving families in the Cincinnati community.

“Shane was born at 39 weeks,” recalls Megan. “We had a regular prenatal appointment on Wednesday, when we heard his heartbeat. On Thursday, we realized he wasn’t moving and went straight to the midwife to get checked out. That’s when we discovered that his heart wasn’t beating.”

After the stillborn birth, Lear and Megan spent time with Shane and began processing what had happened.

“The staff was very compassionate, we had lots of opportunities to hold Shane and spend time with him. But we couldn’t keep him in the hospital room for very long,” says Megan.

Later while talking with a friend, Megan learned about the CuddleCot™. It is a cooling system designed to fit within a small cot or bassinet and allows babies who have passed away to remain with their families longer. This gives family members more time to form an important bond with their child. It can include everything from dressing the baby to simply staying close.

The CuddleCot™ also eliminates the additional trauma many parents feel after being suddenly separated from their baby when they are taken to a cool mortuary environment. In fact, data on the effect of holding and spending time with the baby after perinatal death largely identifies positive psychological outcomes for the parents.

“I had no idea what it was. I realized how beneficial it can be to people in this situation,” says Megan. 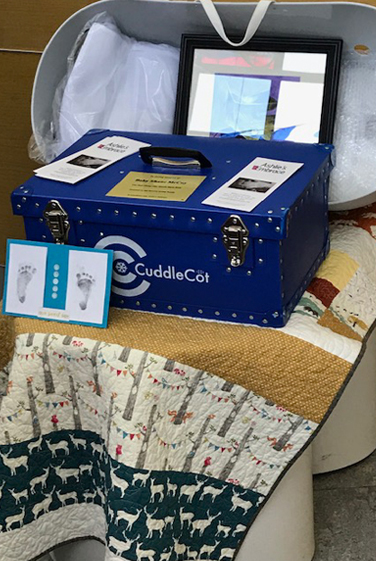 The McCoys partnered with Ashlie’s Embrace, an Ohio-based non-profit organization dedicated to providing CuddleCots™ to hospitals and medical centers. Lear and Megan, along with their families, contributed an initial $2,500 and Ashlie’s Embrace supplemented the remaining funds.

A CuddleCot™ was placed at Mercy Health – Anderson Hospital in remembrance of Shane and in recognition of the support the McCoy family received from the staff.

On August 9, 2019 the family and staff reunited for a special dedication of the CuddleCot™. The case inscription reads, “In Loving Memory of Shane. The Best Thing Our Hands Have Held.”

“Just as every pregnancy is different, every loss is different. Everyone grieves differently,” says Anita Beck, RN, Anderson Hospital Perinatal Bereavement Coordinator. “Some families want to have their baby in the room the whole time and want to spend time with their child. The CuddleCot™ allows for that, keeping the infant cool and slowing the change that the infant goes through after still birth. We’re very grateful for the McCoys’ thoughtful and caring donation, which will help other grieving families.”

“We want families to know they are not alone, their loss matters and their baby matters,” says Megan. “We wanted baby Shane’s existence to help other people.”

Stillbirth affects about 1 percent of all pregnancies. Each year, about 24,000 babies are stillborn in the United States. That is about the same number of babies that die during the first year of life, and more than 10 times the number of deaths that occur from sudden infant death syndrome (SIDS).

This month, Mercy Health is working to also place a CuddleCot™ at its other Cincinnati-area family birthing centers at Fairfield Hospital and West Hospital.