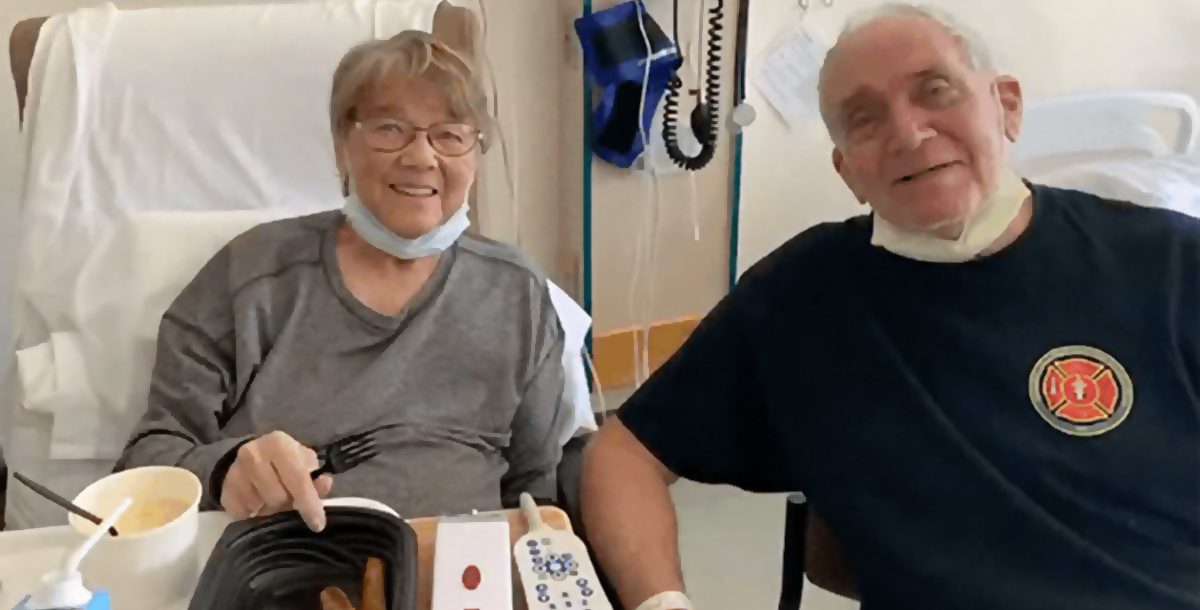 Jim Weeks and Esther Jacobs sat across from each other at a small table enjoying a meal. It was almost as if things were, well, normal.

However, their food was served by nurses fully masked and their view was from the eighth floor of Mercy Health – St. Rita’s Medical Center in Lima, OH. Jim and Esther both spent several days in the hospital after being diagnosed with COVID-19. Today, they are happy, feeling better and thankful to be alive.

The St. Rita’s clinical team has been caring for those throughout the community who have tested positive for COVID-19. And while this virus can cause serious illness, Jim and Esther are proof that people are getting better.

“Jim and Esther’s story is a bright moment for our care teams,” says Dr. Matt Owens, chief clinical officer at Mercy Health – St. Rita’s Medical Center. “Moments such as these should be a source of hope and reassurance that we will get through this together and find a future beyond this pandemic.”

Now both 77, Jim and Esther were high school sweethearts until their families moved away. When their 50th high school reunion came around, Jim noticed on the roster that Esther was widowed. Recently single himself, Jim reached out and the pair has been together ever since.

Therefore, when one of them tested positive for COVID-19, it wasn’t long before they both found themselves in the hospital.

“I don’t know,” Jim says of how he may have contracted the virus. “I wish it was something clear cut. Like I shook hands with someone and it felt hot…none of that obviously happens.”

After suffering from a stroke in early December 2019, Esther has needed additional assistance over the past few months. Jim has always been there to help. However, in late March Jim noticed that Esther appeared to be losing ground. They decided to call the local COVID-19 hotline and it was determined that Esther would be transported to St. Rita’s.

“It was kind of scary,” Esther recalls. “I didn’t know what was going on with Jim, but I knew he was in bad shape.”

While Jim was in the hospital, Esther was discharged and cared for by St. Rita’s home health team. However, she ended up needing additional assistance and was brought back to the hospital’s transitional care unit. Once Jim was feeling better and off the ventilator, he was given an adjacent room.

“They ran it through infection control,” Jim shares. “Because neither of us were positive and I was well on the way to recovery, it was ok. We met for our meals. We wore masks when other people came in the room. We were able to sit across from each other and talk about this, that and the other.”

After 17 days in the hospital, six of them on a ventilator, Jim was discharged and went home. He says he’ll get their house ready for Esther to return when she is feeling just a little bit better.

“The realization of how sick I was, that is not lost on me,” Jim says. “The support I received and I’m still getting from the staff at St. Rita’s and my family was so important. The nursing staff is the best in the business. The fact that the nurses were in daily and in sometimes hourly contact with my kids was a big, big help and very much appreciated.”

The pair know that they are lucky and may have even beaten the odds. They credit the diligent and optimistic staff of St. Rita’s for the care they received as well as the power of prayer.

“Please continue this fight with us,” Dr. Owens adds. “Continue to practice social distancing. Continue to wear masks in public. Wash your hands and practice good hygiene techniques. If you are home with mild illness isolate yourself from family and friends. So far in Ohio and in our local communities, we are seeing the positive benefits of the public following these directives. If we continue to follow this guidance, we will find ourselves a more positive future than that initially predicted.”