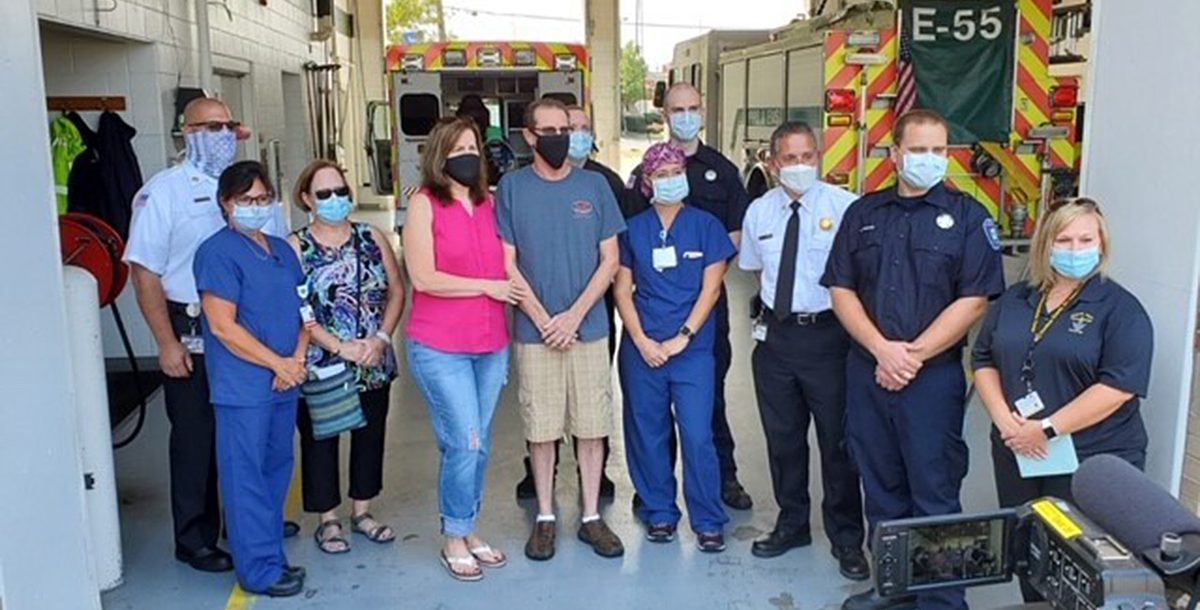 Mark Thanks His Care Team For Saving His Life

Visiting his daughter’s house, driving the grandkids in the golf cart… 56-year old Mark Wiley remembers none of that. The only memory the White Oak resident has of his birthday on July 25 includes a drawing that now hangs on his refrigerator door.

“My granddaughter drew a milk carton for me because I love milk. It’s red on the top and the bottom. She wanted to draw a cow and I helped her do that,” says Mark. “After that, I don’t remember anything until I woke up in the hospital.”

A fun day celebrating with his family was followed by a health scare that nearly took Mark’s life. On the morning of Sunday, July 26, he collapsed at home in full cardiac arrest.

“My wife, Tatia, did everything from the time I went out,” says Mark based on what others have told him. “She called 911 and the operator talked her through CPR. She performed it for seven minutes until Green Township paramedics arrived and took over.”

Mark was taken nearby to Mercy Health – West Hospital, where he went into cardiac arrest a second time and was once again revived. Timothy Brennan, MD, a Mercy Health physician and cardiologist, first placed an intra-aortic balloon pump to help Mark’s heart pump more blood.

It turned out that Mark’s heart disease was too bad for non-surgical cardiac intervention, and he would need to undergo surgery.   His care team cooled his body down, placing him in therapeutic hypothermia for 16 hours to protect his brain function before he went into the operating room.

“Dr. Patel said, ‘Let me see your palm. I saw the bruise from your palm on his chest,’” Mark shares.

After surgery, Mark woke up and says he “started wiggling my feet and hands. The next thing, I was walking around the room and eating.”

He left the hospital on August 8 and has been in cardiac rehabilitation since. Looking back, Mark wonders if an old injury may have masked something his body was trying to tell him.

“I hurt my shoulder in 1984 and had a lot of surgery on it,” he says. “For months, I had a burning sensation up near my right shoulder but I wrote it off. My wife said, ‘Appease me. Let’s go to the doctor.’ The doctor told me to stop doing what I was doing when it hurts. That was three weeks before my cardiac arrest.”

Earlier this month, Mark and his wife had a special visit with the care team that save his life.

“The reunion was amazing. Overwhelming but humbling at the same time,” says Mark. “I thought about this for a couple of days. What do you tell people who saved your life? Thank you was all I could think of. It never dawned on me what happened until then. The dispatcher walked my wife through CPR, EMS arrived to take over and the right doctors were at West Hospital at the right time to make the right decisions. Knowing what everyone did and how they did it, the only thing that didn’t go perfectly that day was the heart attack.”

CPR was a key element in Mark’s survival. The Wiley family and Green Township are now doing their part to get more people trained in this valuable lifesaving technique.

“My wife’s company is going to offer a CPR program and so is Green Township EMS District Chief Darren Mooney,” Mark is proud to share.

Learn more about our heart and vascular services and find a Mercy Health provider near you.