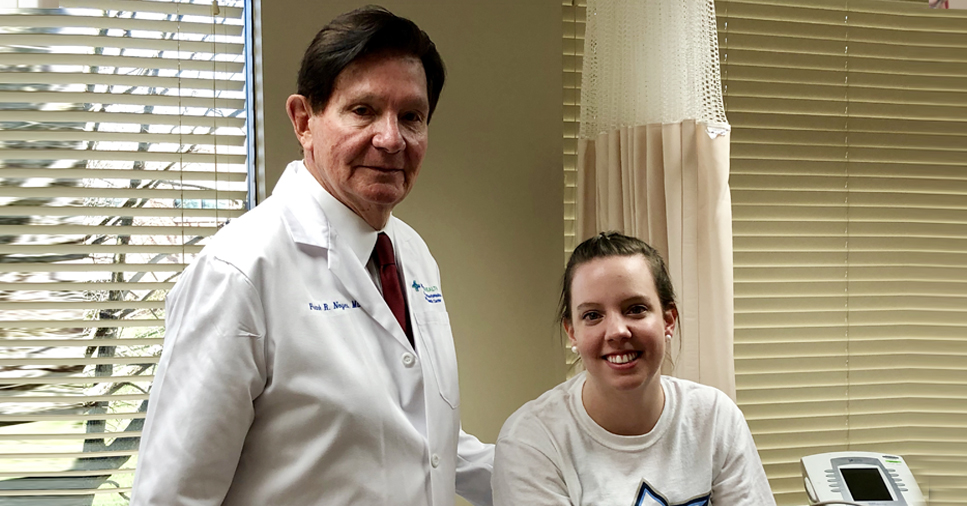 With anterior cruciate ligament, or ACL, injuries becoming more and more common among people in the United States, new tactics and methods of treatment for recovery after ACL repair and reconstruction surgery are emerging. The latest recovery remedy?  A blood pressure cuff.

Learn how a blood pressure cuff can improve recovery after an ACL repair and reconstruction.

Katie Sloneker was playing basketball in a summer league game after finishing her junior year of high school when she tore her anterior cruciate ligament, or ACL. The ACL plays a major role in stabilizing the knee joint and it connects the thighbone to the shinbone.

“I dribbled sideways, planted my feet and my knee went in,” she recalls with a wince. She underwent surgery and rehab but then disaster struck again in Katie’s senior year of high school.

“I did a lay-up, jumping off my right foot, and I landed awkwardly. I hit the floor and it was like in slow motion. My knee wobbled. I felt the pop again and I knew right away, I’d torn my other ACL,” she recalls. “It was kind of sad knowing that I had to start over.”

Katie is not alone. As many as 300,000 people in the United States and millions worldwide require ACL reconstruction surgery to restore stability to the knee following injury. But that may not be the end of their knee troubles.

“Six months after surgery, most ACL repair patients don’t yet have a return to muscle strength and as many as one in five will reinjure themselves because of this,” says Mercy Health Physician, orthopaedic surgeon and knee expert Frank Noyes, MD.

Dr. Noyes and his team set out to see if they could address this issue though a technique weight lifters have used in Japan for 20 years – restricting blood flow during a short set of exercises.

“The question was ‘Can we use this method safely with patients?’” says Dr. Noyes.

“We found that exercising with a blood pressure cuff for just five minutes tricks the muscle into thinking it’s doing a strenuous work out,” says Dr. Noyes. “The reduced blood flow, even at low weight resistance, causes the body to generate lactic acid and chemicals that stimulate the muscle and help build strength. In other words, it causes ‘the burn’ that signals a tough, muscle-building workout.” 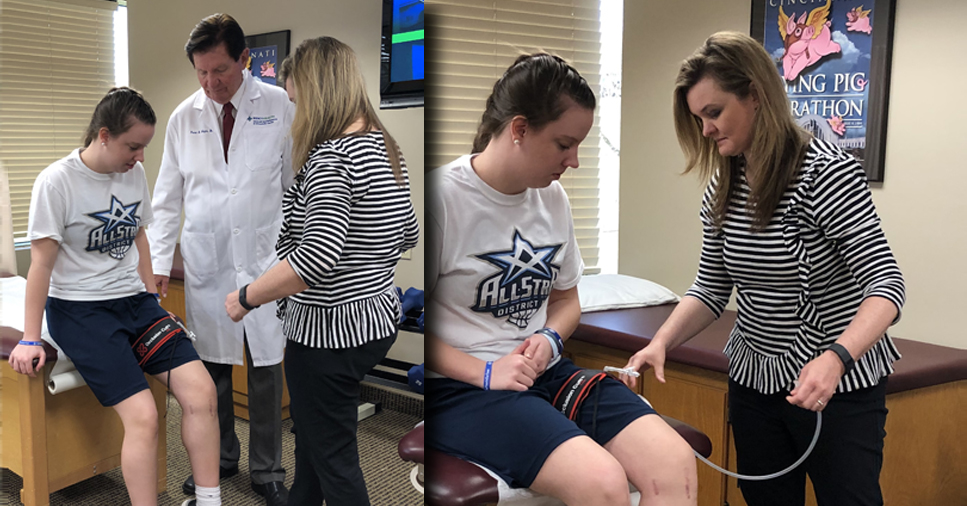 “Patients who were only able to lift at 30-40% of their ability have seen 15-20% strength improvements after nine 15-minute exercise sessions over three weeks. They will gain another 15-20% in strength if they continue the exercises for another three weeks,” says Dr. Noyes. “Based on our findings, we believe that if patients start this exercise program as soon as three months after surgery, this is the most efficient way to get an athlete back into their sport safely.”

Katie completed her course of treatment and was able to return to the sport she loves.

“I came back in January and finished out the last half of season as well as the tournament,” she says. “I was really happy to do that. I really like playing.”

Dr. Noyes’ findings pave the way to help ACL repair and reconstruction patients, as well as arthritic patients who need knee replacement surgery. These latter patients often lack the muscle strength to exercise, yet they must build strength prior to surgery that will help alleviate their pain. Using the blood flow restriction method, they can build the strength they need in just eight to 12 weeks.