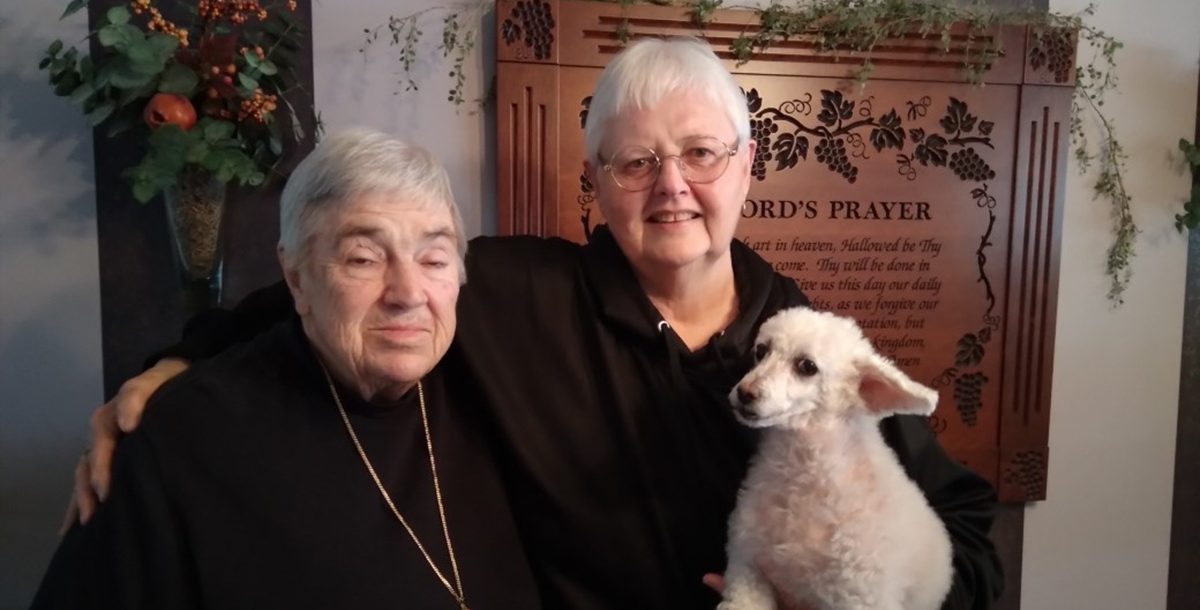 Kay Umstead and Joyce Wright are more than just friends. After nearly 45 years of friendship, they consider themselves family. They see each other almost every day and talk multiple times a day as well.

So, when Joyce hadn’t been answering her phone on Feb. 1, 2022, Kay dropped everything and raced over to her friend’s house. What she found still rattles her – Joyce was sitting in her chair nonresponsive and not moving. She feared the worst and thought her best friend had passed away.

However, Kay came closer and realized Joyce was having a stroke. And according to her medical team, Joyce’s stroke was a big one.

The ensuing hours were a whirlwind for Kay. After calling 911 she followed Joyce’s ambulance to Mercy Health – St. Rita’s Medical Center. Upon entering the hospital, Kay bumped into Joyce’s niece who volunteers at St. Rita’s. Together, they went to find her.

“We walked to ER and they told me she was having a procedure because she had had a stroke,” Kay recalls. “We went to a waiting room and it didn’t seem like it was long at all when two women introduced themselves as neuro navigators. They told me doctors were going to go into her head to remove a blood clot. I didn’t know they could do that, much less in Lima.”

Neuro navigators Jody Swisher and Harvest Nuss talked to Kay as she waited to hear what was going on. Their kindness and willingness to answer her questions offered much comfort.

Akram Shhadeh, MD, a neuro interventionalist, performed Joyce’s thrombectomy that morning. A thrombectomy is an emergency treatment used to remove dangerous blood clots in the vessels of the brain.

“There is nothing more rewarding and humbling than treating a stroke with intervention where you can save the patient from imminent death or major disability in a very short time,” Dr. Shhadeh says.

Kay remembers Dr. Shhadeh coming to see them to share the success of the procedure. She particularly remembers his kindness in showing before and after photos of her best friend’s brain. In fact, Kay shares that everyone she encountered along the way was compassionate and kind.

“I just felt like these people were in this because they love doing it and they love helping people. That it was not just a job,” she says.

Despite the care team’s encouragement that everything went well, Kay dreaded to see her friend the next morning. She was sure Joyce would forever be changed.

“I went in and saw Joyce sitting up in bed, absolutely fine. I started to cry. I was so thankful,” she states. “When she saw me crying, Joyce asked, ‘What did you think was going to happen to me?’ and I said, ‘You should have seen you when I found you in that chair!’”

“I have a tendency to fall backwards now into a chair. But other than that, I’m doing just fine,” she says.

The two women have returned to their routine of meeting for breakfast, talking and seeing each other multiple times a day. Kay shares again that she is so grateful for not only the clinical expertise that her friend received, but also0 for the compassion that she herself experienced while at St. Rita’s. In fact, this experience inspired to write a letter to the hospital.

“I wish I knew the names and faces of everyone who had a part in this miracle,” her letter shares. “The kindness and professionalism showed to us by everyone was outstanding. I wish they could all feel the joy that I felt at this outcome because I think it would help them to know how much of a difference what they do and how they conduct themselves means to the people they help.”

May is National Stroke Awareness Month. When it comes to strokes, it is important to act fast and seek medical care immediately. This is because quick diagnosis and treatment can minimize and sometimes even prevent the effects of a stroke.

Learn more about strokes as well as stroke warning signs to look out for.

Kay has told us this story and is really impressed with your organization! She has been amazed at Joyce’s treatment recovery and by the professionalism and skill of your staff. I’m so glad you were there for the two of them!
July 26th, 2022 | 1:46pm