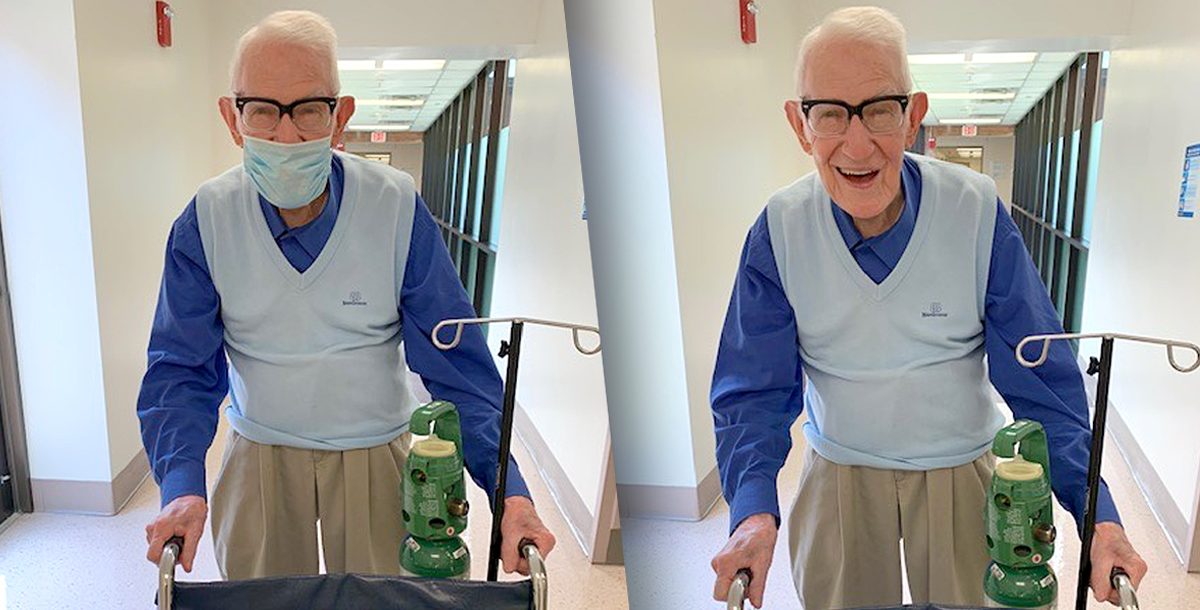 Charlie Bailey applied as a volunteer with Mercy Health – Clermont Hospital in 1982. For nearly 40 years, he has served the hospital and its mission, providing help to everyone he encounters.

Over the course of his tenure, Charlie has contributed over 10,000 volunteer hours in a variety of assignments. He has served most recently as a transport volunteer, taking patients to their cars as they leave for home after their hospital visit. He also runs errands for this department.

While COVID-19 temporarily put a halt to our volunteer program, Charlie has since had his COVID-19 vaccine. He also recently returned to service after celebrating his 99th birthday on April 1. Our hospital team members gladly welcomed him back.

When asked why he chose to volunteer at the hospital, Charlie shares, “I thought after I retired from P&G that if I volunteered and helped others I could get to heaven! Now my main purpose in life is to get to heaven. This place is just a stopping off place. I want to be able to answer well when God asks, ‘what did you do with your life?’”

Service is part of Charlie’s nature. Not only did he start volunteering for the hospital, but he also served as the volunteer treasurer for St. Vincent DePaul and the Free Store for over 25 years.

His long history of service started in the Army in World War II, when Charlie was in the 202nd Engineer Combat Battalion. His wartime service took him to Ireland, Scotland, Wales, France, England, Luxembourg, Holland and Germany.

Charlie was one of the soldiers who built the bridge over the Rhine River that General Patton’s 35-ton tanks crossed over. Charlie drove the last pin in the bridge in the summer of 1944 and watched as the tanks crossed one by one. He received five Bronze Stars for the five battles he was in, including the Battle of the Bulge.

Interested in giving back in your free time? Learn about the volunteer opportunities we offer at Mercy Health.