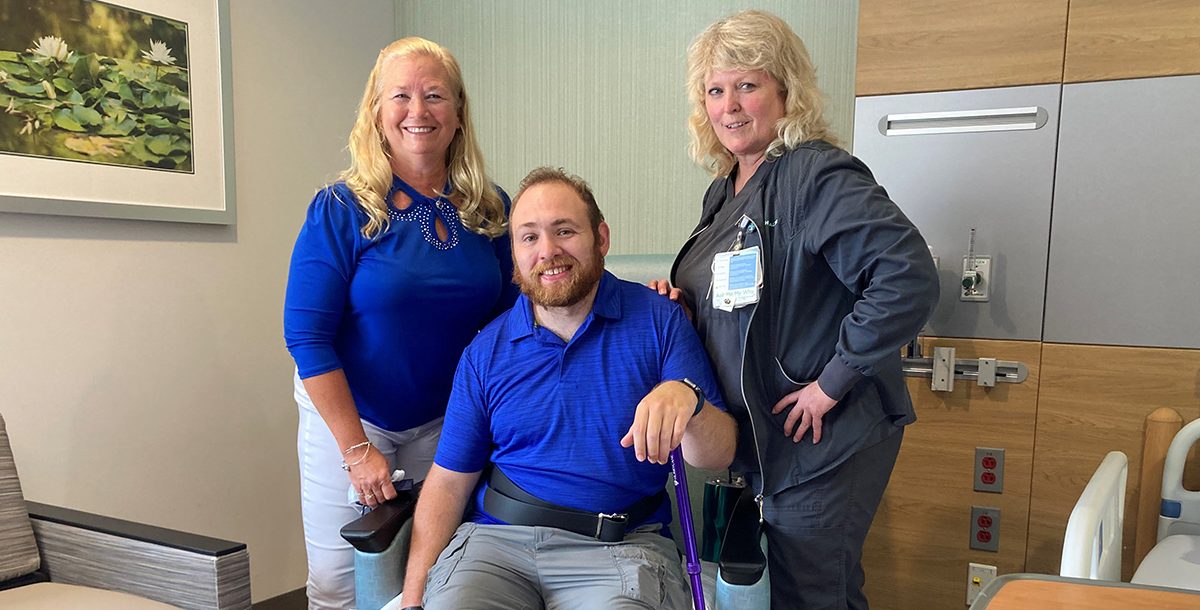 At 36, despite his health challenges, Randy was working as a patient care assistant at Mercy Health – Anderson Hospital until a COVID-19 surge hit. For his safety, he left his job to stay home at that time.

Then, one Sunday in February of this year, Sharon flew to see family in Florida. She knew that Randy received a package at home and brought it inside the following Wednesday. Sharon spoke with him on Wednesday but when she tried to contact him on Saturday morning before coming home, she was unable to reach him.

“I was trying to reach him on Saturday and he didn’t answer,” Sharon recalls. “He keeps his notifications off, but by 10 a.m. when they were not back on, I called his sister and his dad to go to his apartment. They found him face down in his apartment. That’s all I knew when I got on the plane to come home.”

A CT scan at Anderson Hospital showed Randy, who takes blood thinners, had suffered a stroke and sustained a huge brain injury.

Sharon, who works as a clinical administrator at Mercy Health – Clermont Hospital and in the intensive care unit, describes it as a “complete blockage of the middle cerebral artery. He had no feeling on the right side and was aphasic.”

Anderson Hospital transferred Randy to The Jewish Hospital – Mercy Health, which offers specialized neurology care. It was there Sharon was finally able to see Randy. Although he was having trouble communicating, he recognized Sharon, was able to say yes and no and could open his eyes for about 30 seconds at a time. After talking with a neurosurgeon, Sharon declined a procedure that wasn’t likely to give Randy much benefit.

“That’s where we left it on Saturday,” Sharon says. “On Sunday, he was awake for one minute at a time and every day he’d wake up a little bit more. Randy could recognize his girlfriend, show emotion and his words were coming back. Shortly before he was transferred to the hospital’s acute inpatient rehabilitation unit (ARU), his right leg moved a little bit.”

Randy started therapy right away and would spend a total of five weeks in the unit.

“By time he left, he was walking in the hall with a walker,” Sharon shares. “He uses a wheelchair for distances and has graduated to a cane in the house. His right arm is starting to be able to perform some gross motor movements. He’s got some grip to his right hand and extension to his fingers. Although his aphasia is not cleared up all the way, he has more words every day. He’s doing amazingly well. I can’t say enough good things about the ARU at The Jewish Hospital.”

Sharon adds that the care team in the ARU was fantastic and encouraged Randy.

“Imagine someone like him coming in and how discouraged they could get,” she explains. “Instead, they laughed and joked with him and made him feel special. Many of them are his same age and they talked with him about Star Wars and other topics that mattered to him.”

Randy received physical and occupational therapy at home but is now at the Mercy Health – Anderson HealthPlex for outpatient therapy. Sharon notes that only time will tell his ultimate prognosis. A recent scan showed that the swelling on the right side of his brain was looking better, but the left side has permanent damage which is affecting his vision.

Although she doesn’t have answers on why Randy suffered a stroke, Sharon and his care team suspect it was related to his heart issue, noting that the clot may have come from his replacement valve.

“Strokes can happen any time to anybody,” Sharon explains. “Take it seriously. If you can’t reach a loved one, it’s worth a 911 call. And believe in the ARUs and the work they can do to help those with a brain injury. I thought I would be taking Randy home wheelchair-bound. Instead, he’s walking independently, showering and getting dressed by himself, thanks to the ARU.”

Learn more about the stroke care and inpatient rehabilitation services we offer at Mercy Health.