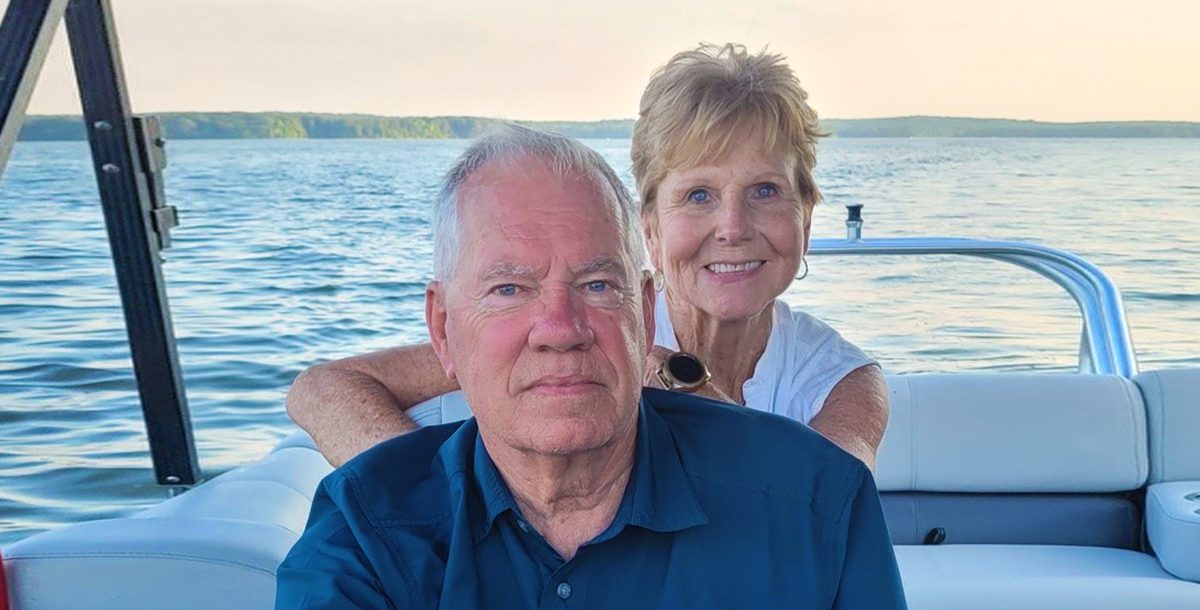 Thanks to Chain of Survival, Kerry Survives Multiple Cardiac Arrests

In June of 2019, right before Father’s Day weekend, Kerry Brandon, then 68, and his wife Debbie were enjoying a typical weekend before the couple suddenly found themselves experiencing a life-or-death emergency.

“The couple of days leading up to it were completely normal days,” Debbie recalls. “In fact, the night before, Kerry went fishing and caught 28 fish. He worked on the roof of the marina. There was no indication of a problem.”

That would soon change.

“We were on a tri-toon headed to local marina for a place to eat and planned to look at a motor home for sale,” Kerry says. “There were two other couples with us. One member of our party, Bonita, was a retired registered nurse and another had been a military medic.”

Those boat guests would prove fortunate when Kerry, who was standing up driving the tri-toon, suddenly leaned left and fell to the floor. The party was on open water, six to eight minutes from where they were headed. Bonita immediately started CPR and Bonita’s husband drove the boat to the marina as Debbie called 911.

Emergency medical services asked Debbie on the phone where they could get to the group.

“I told them we were headed to Eddy Creek Marina Resort,” she shares. “Four minutes and 20 seconds later, when we pulled up, the ambulance was there.”

The crew defibrillated Kerry, who was 43 miles from Mercy Health – Lourdes Hospital. Luckily, the ambulance had been near the marina because they’d been called to the scene of an overturned tractor nearby. While in the area, the squad had taken the opportunity to scout a place to land helicopters in an emergency.

“They loaded me up and headed to Paducah, Ky. via I-24,” Kerry says. “Then, at mile marker 21, 17 miles from where we were going, the ambulance gave out. However, a second one came within minutes and took me in.”

At the hospital, Kerry suffered a second cardiac arrest. His care team put Kerry in a medically induced coma and cooled his body down using the hypothermia protocol for patients who’ve experienced cardiac arrest. Lowering the body’s temperature causes the body’s chemical reactions to slow down and may lessen inflammation in the brain. The procedure can reduce brain damage following oxygen deprivation during a cardiac arrest. Kerry then had a stent placed to open a partially blocked artery.

Kerry had one more arrest in the hospital on Father’s Day when he was sitting in his recliner in his room. Debbie only realized it happened when a nurse rushed into the room and performed CPR on him.

Kerry stabilized and was released the following Tuesday. Then, on Wednesday, he visited the EMS squad that helped save his life.

“I talked with those fellows. I could see the shocked look on their faces,” Kerry says, noting that he thought they didn’t expect him to survive.

“We had wonderful EMTs,” Debbie adds. “They came back to the hospital to talk to me and check on Kerry and were super through it all. We couldn’t have been more fortunate.”

Kerry’s doctors were unable to determine the case of his cardiac arrest and suspect it was electrical in nature. So, he had a defibrillator placed to protect against any future heart rhythm issues.

Since his cardiac arrests, Kerry is doing his part to put lifesaving tools in place in the community. He’s purchased automated external defibrillators (AEDs) and placed them at locations that previously didn’t have one available.

He’s also participated in a community conversation on the importance of CPR put on by the American Heart Association and Mercy Health. A video of the conversation is now available to view on the AHA’s YouTube channel.

There’s no question that Kerry recognizes the important role CPR, including defibrillation, as well as the nearby EMS squad played in ensuring his survival.

“We thank all those involved in saving my life,” Kerry says. “It wasn’t just happenstance. If I’d been at home with my wife, I probably wouldn’t be here. I wish there was a mandatory CPR class in high school. I would love to see this.”

Visit the American Heart Association’s website to find a CPR class near you.

Also, learn about the heart and vascular services we offer a Mercy Health.