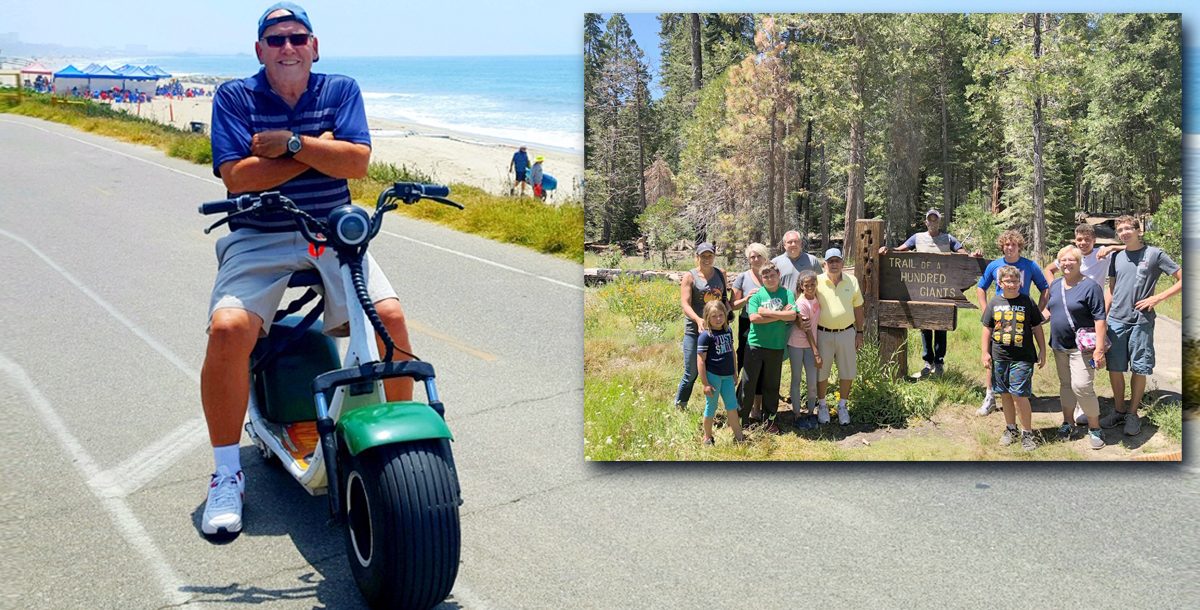 The pain in Charles’ knee got to a point where it was unbearable.

He had been dealing with the pain for more than five years, including three years with cortisone shots for treatment. But finally, during a family visit, Charles realized it was time for a change.

“We do a lot of walking when we’re visiting our son and grandkids in Chicago,” he says. “I had to sit down on a park bench to rest because my knee hurt so bad. I was frustrated I couldn’t keep up with my grandkids, so I called my daughter back in Ohio. I told her I’d better think about a knee replacement when I get home.”

Charles’ former doctor had retired, so he began looking for a new physician. After hearing about the Mercy Health Orthopedic Department, Charles scheduled an appointment with Richard Miller, DO, of Mercy Health – St. Vincent Medical Center.

The initial visit with Dr. Miller assessed the condition of Charles’ knee and his overall health. Dr. Miller asked him about the extent of his pain, what he does to manage it, and how the pain was impacting his daily activities. While the pain during his recent Chicago trip had been the final straw, Charles had been struggling with his pain for a while.

Charles’ seven grandchildren mean the world to him. Not being able to play cornhole, ride bikes, or play baseball due to his pain had been very difficult.

Fortunately for Charles, he was an excellent candidate for a total knee replacement, which Dr. Miller quickly scheduled for him. Dr. Miller described a new tool for knee replacement surgeries, called the NAVIO Surgical System. According to Dr. Miller, this tool adds an extra layer of pre-surgical planning and provides an extremely high level of accuracy. Using this method would mean a better long-term outcome for Charles.

With the date of the surgery scheduled, Charles and his wife, Sandy, attended a joint replacement class to learn about what Charles would experience. Their orthopedic navigator, Lauri Oakes, explained how the NAVIO Surgical System worked and helped them plan.

“Lauri is awesome,” says Charles. “The class was informative, and she took us around explaining everything.”

Charles surgery went amazing and he was pleasantly surprised afterwards.

“They had me up and walking the same day,” he exclaims. “And, I walked out of the hospital and headed home the very next day.”

Charles and Sandy both appreciated Dr. Miller’s calm and engaging approach. They both felt they had been fully prepared for the surgery and its outcomes.

Sandy also found using Mercy Health’s web-based interactive HealthLoop tool to be extremely helpful. She used it to do things for Charles like refilling medications and scheduling his follow-up appointments.

“Having this convenient access to everything we needed to handle care for Charles was wonderful,” Sandy says.

Both Sandy and Charles agree the total knee replacement has been a complete success, and surprisingly comfortable. From the surgery to the follow up care, Dr. Miller, Lauri Oakes, and other staff members made the entire experience easy and educational.

“It was good for me and turned out better than I had expected it would,” says Charles.

“I can walk now without pain, which means everything. About a year after the surgery, I was able to join my family on a vacation that included riding motorized scooters, hiking, and lots of cornhole with my grandkids.”