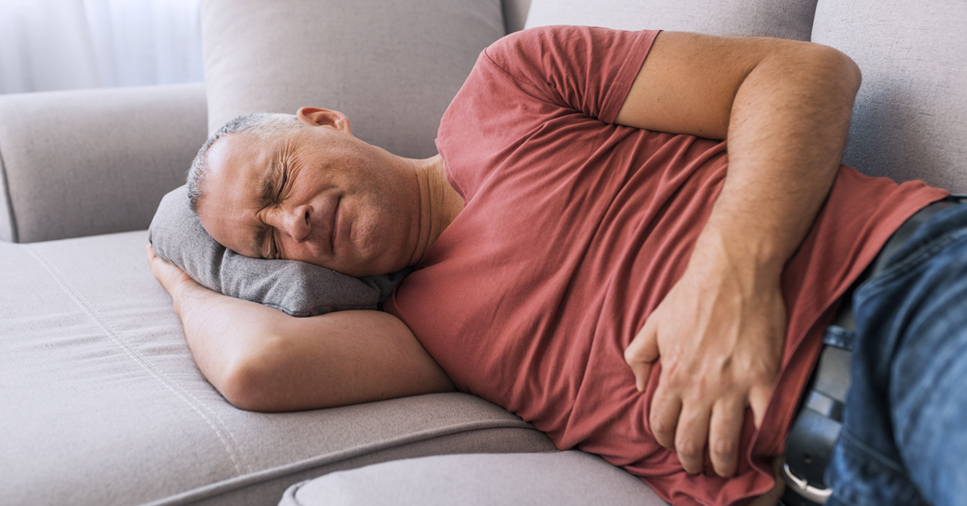 Everything You Need to know about Irritable Bowel Syndrome

Dr. Thomas Schussler: Well the definition of IBS has evolved over the years and it comes from a bunch of people that meet in Rome every year. Currently, the latest definition is abdominal pain with a change in bowel frequency or consistency, that lasts one day per week over about three months and again, there has to be abdominal pain. If there is just a change in bowels, then that’s just constipation or diarrhea.

Mike McConnell: Is abdominal pain different from a cramp?

Dr. Thomas Schussler: Generally, it is pain that is brought on or alleviated by a bowel movement.

Mike McConnell: Ok well I haven’t had that. So how do you diagnose it?

Dr. Thomas Schussler: Well most people who come to a doctor actually have a pretty significant problem. They get to the point where it is affecting their life. IBS is actually the number one reason for missed work. We can make the diagnosis usually by history alone and ruling out those patients with warning symptoms that may need to have other tests.

What causes IBS and how do we treat it?

Mike McConnell: what are some of the causes of IBS?

Dr. Thomas Schussler: It’s multifactorial as far as causality. Maybe diet, maybe stresses, or it may be lack of sleep. We don’t know the exact cause.

Mike McConnell: Alright so treatments would include what?

Dr. Thomas Schussler: Right now, treatments are aimed at stress management or changing the bowel pattern. If you have predominant constipation we may treat that and then see relief in pain later or if the problem is diarrhea, treating that may help. Frequently though people have irritable bowel with diarrhea and then switch to constipation or vice versa and a third of people will switch from year to year so it is a moving target.

We may focus on treating the enteric nervous system through different medications, for instance, there are thirty neurotransmitters in your gut. In fact, 95 percent of serotonin, which is the target for the treatment of depression, is in the gut. Or we may treat, although we have very little data, abnormal bacteria. For example, there is a condition that mimics IBS called small intestinal bacterial overgrowth.

Mike McConnell: Is IBS Hereditary? Am I more likely to have it if my parents did?

Dr. Thomas Schussler: No, but I think it is more so socioeconomic. We don’t know an exact gene that is passed that produces this but families tend to eat similar foods, have similar stresses and life experiences. That is probably why we do see it in families but there’s not a purely genetic component.

Mike McConnell: So, is it curable?

Dr. Thomas Schussler: Not curable but treatable and manageable.

Mike McConnell: Would changes in diet and exercise help?

Dr. Thomas Schussler: Well certainly, but everyone gets an individual prescription. The problem with IBS is that there’s a high placebo effect, in everything you do. If I give you a sugar pill you’ve got a 30 percent chance of getting better. Unfortunately, even the medications that are FDA approved are not that great either, they probably only give you a 15 percent improvement over placebo. So, the best thing is to have a good relationship with your physician and if one thing doesn’t work go ahead and try the next thing. Certainly, there are a lot of diets that are discussed. For instance, a low FODMAP diet, a gluten-free diet or a lactose-free diet and all of them may be appropriate but generally, are not long term diets and are not very well tolerated.

Mike McConnell: Would you say that the number of cases of IBS has changed? Is it more common these days than it was 10 or 20 years ago?

Dr. Thomas Schussler: I think that, like with any disease, as we learn more about it and start talking about it prevalence goes up but right now it’s at about 14 percent and that’s about what I’ve seen in every study I’ve ever read. It’s more common in women I think because men are less likely to talk to their doctor about it.

If you want to learn more about IBS or other gastric conditions or find a gastroenterologist near you, visit our Gastroenterology and Digestive Health page.